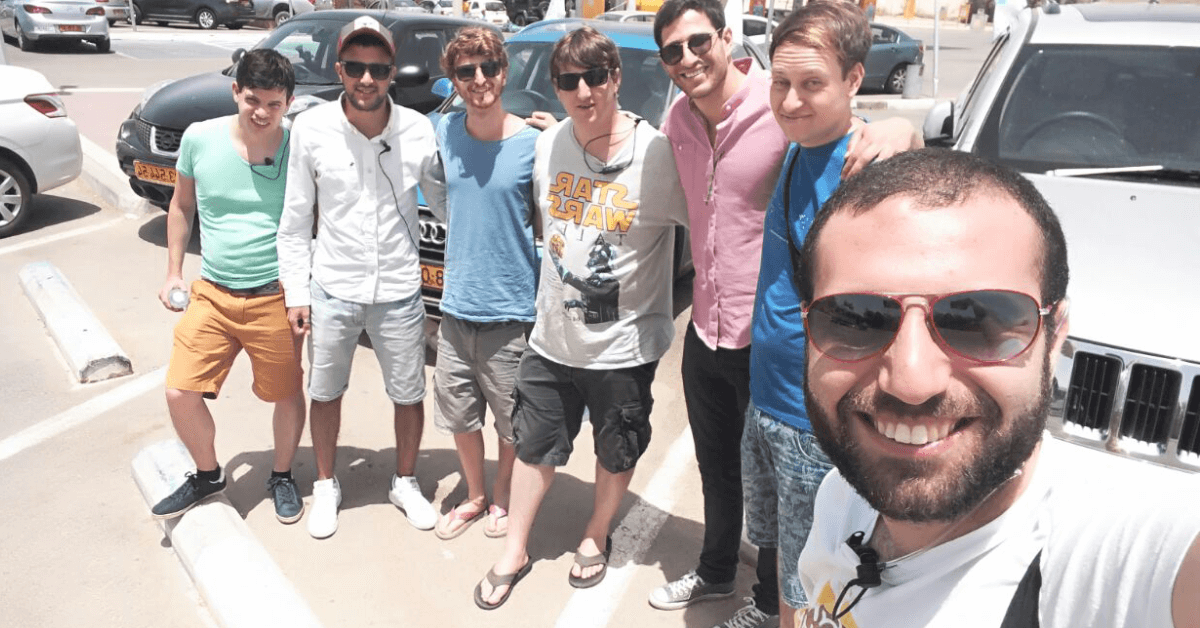 NINE STEPS TO THE ULTIMATE LEARNING AND BONDING AND CHILLING EXPERIENCE.

“But where to,” we all wondered. Apparently the destination and plan were one of the company’s best kept secrets. Our bosses did tell us one thing — “pick a partner, invent a charger-related product, and create a presentation that you’re going to pitch to investors — us.”

A few days before the deadline, while my partner and I were busy “inventing” our smart and awesome phone charger, they finally broke and told us where we were going.

For success inside the office, one must properly relax outside of it… ????????✌?️

Part 2: The hottest day of the year

After programming a simple “software” that divided us randomly into the cars, 10 people, 3 jeeps, and 6 flags branded with GKI Group’s logo set off on the four hour long drive to Eilat. (Don’t know where you’re from but in Israeli driving terms, four hours is considered very long and far).

Outside, as we came closer to Eilat, and the view switched from urban to desert, the temperatures were rising. A few stops along the way left us concluding to never leave the air-conditioned cars again. By the time we got to Eilat, the temperatures had climbed to about 46 degrees.

The second surprise was revealed when we arrived: we’re staying at the 4-star Isrotel Agamim hotel! The 3rd surprise was far more exciting: Our rooms were filled with snacks, alcohol, branded/personalized towels, bottles, a small book to read in the bathroom and… the schedule.

What’s next? Freetime! We put on our swimsuits and immediately jumped into the pool that was just outside our doorstep. Literally. We stepped out of the room onto a balcony leading to the pool. The heat outside didn’t bother us at all anymore.

How about some personalized towels and champagne with that? ?? #bestworktrip #intheworld

Once upon a time…. The happiest office on earth took their workers on a surprise getaway trip: the happiest spontaneous vacation + work seminars, on earth… And this was where they stayed ✌?️❤️☀️?

Time to get dressed, it’s dinner time. They took us to a restaurant called “El Gaucho”, where they offered us different kinds of steaks and endless amounts of beer and wine. We sat at the private section of the restaurant, where our CEO Lital and Founder Gal started off with the first educational lecture: What is GKI Group? What’s our vision, our history, our ventures and what are our future plans? Interesting? Don’t worry, you’ll read all about it soon enough. With our bellies full of steak and minds full of newfound company knowledge, we headed back to our hotel rooms for to sip some more whisky and smoke some cigars, to ensure a good night sleep.

Part 5: It’s a new day
“Rise and shine, people.” We’ve got a long day ahead of us. The morning began with another surprise: Dry-fit T-Shirts branded with our logo. What were they planning? We went to eat the hotel breakfast, all dressed in our new matching shirts, and started filling our bellies with omelets, pancakes, shakshuska, salads, bread, salmon, more fish, and everything (kosher) you could think of. Feeling full and excited to start our day, we headed to our first activity — an ATV mini jeep ride. Everyone picked a partner and a ride. Surprisingly, I sat next to my hotel roommate, and charger-project mate. We put on the safety glasses, and mouth cover, and started driving in the insane desert area surrounding Eilat. It was amazing.

After taking a quick shower back at the hotel, it was time to get serious — one hour until the presentation! My partner and I finished up memorizing our text, got dressed accordingly, and hoped for the best. We spent the next few hours at “Eilat Hub” who generously hosted us in their free space for entrepreneurs and startups. It’s an exciting spot, and actually the first attempt at creating a tech ecosystem in this southern outskirt of Israel. The presentations began. Four teams fighting for… well, nothing, but attempting to create the best and most persuading presentation to win an investment from GKI Group. Everyone was showing great ideas with extensive research. Each team was also asking for too much money. But that’s how you learn. After each presentation, Gal & Lital gave their remarks and reviews, really succeeding at opening our minds. Afterwards, they lectured us about the “do’s and don’ts” of accepted protocol in investment meetings, before another interesting lecture about the entire process of investing.

Thank you #HubEilat for hosting us. @doravr made this #3Dprinted statue as a token of our appreciation ??

Part 7: Fun night out
Other than the beaches, and the heat, Eilat is also known for its vibrant nightlife. All of us, all of GKI Group, went together to eat and get drunk. First we went to Mike’s Place, with an All-American menu and awesome buffalo wings. Next we went partying in the Three Monkeys, probably the most famous bar in Eilat. We enjoyed a live concert, a lot of drinks, and a night so awesome that you’d forget you’re actually with your colleagues.
When we went back to the hotel, exhausted and mildly drunk, we kept on drinking and then finished the night off by jumping into the pool with our clothes on. #YOLO

Part 8: Beginning of the end
Good morning! By morning, we’re not talking too early, we actually woke up pretty late. Nothing planned for this morning except for packing our bags, checking out, and eating breakfast. “Goodbye, hotel”- we were crying, on our way to our next adventure — another lecture held in Eilat Hub! This time, they gave us valuable information about how privately held companies are built — from the establishment of a board, to shareholders, and even the CEO. When it was over, we went for one last stop at the Ice Mall, and went ice skating in the middle of the large shopping mall. I didn’t fall, but maybe that’s because I was holding onto the side railing the entire time.

Part 9: Leaving Eilat
Around 5 PM we started heading out, same cars, but different people in each. It took us a while to return back to our headquarters in Kfar Saba.
The entire trip was fun, amazing, consolidating, and enriching. I learned a lot during these days we spent in Eilat. About the company and it’s people, about the industry, about what it’s like to be an entrepreneur and an investor,, and how it feels like being out in 46 degree heat.
Wanna learn more? Follow us, I promise you’ll get all the information you need.