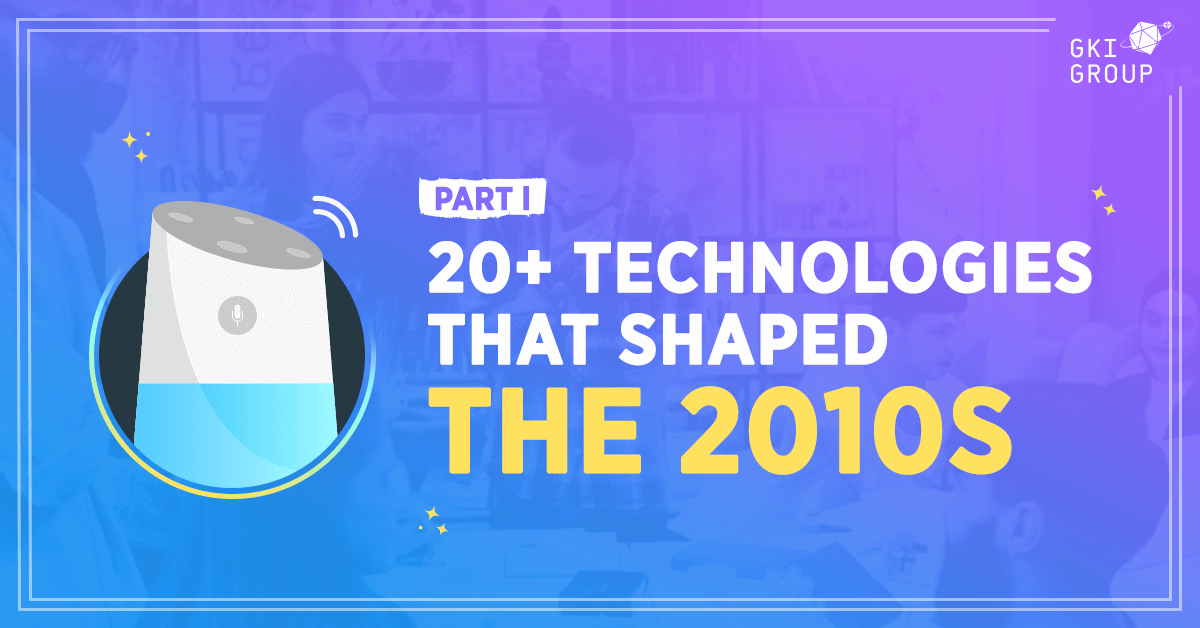 WHAT’S THE CONNECTION BETWEEN UBER, AIRBNB, WHATSAPP, AND NETFLIX? IT’S THAT THIS DECADE WOULDN’T HAVE BEEN THE SAME WITHOUT THEM. THIS IS PART I OF OUR TECHNOLOGICAL VOYAGE THROUGH THE TECHNOLOGIES THAT SHAPED THE 2010S.

The 2010s are coming to an end and a new decade is approaching. Sure, the major products that we use today- like scrolling the never-ending Facebook feed on your laptop PC while watching a YouTube video on your iPhone- were invented during the late ’00s, but there are still some BIG technologies that have been invented or commonly used and perfected during this decade.
In this grand, two-part article, we’ll cover, summarize, and celebrate some of the greatest technological advancements of this decade and look forward to what’s coming ahead. Join us for part I of our technological voyage, where we talk about all the new services that have changed our lives and some of the technologies that shaped the 2010s, from Airbnb to Netflix.

Airbnb – Sleeping in other people’s homes

Airbnb changed the way people travel and made it cheaper for travelers. They’ve invented a new source of income for people with apartments. They made hotels lose their minds (and customers) and push to a series of regulations. True, not everything turned out great; While making accommodation cheaper for travelers, they’ve also made living more expensive for locals. More and more home and building owners worldwide allocate their apartments solely for Airbnb, reducing the number of vacant apartments for rent and causing the average rent prices to rise up.

But all in all, we’re all pretty happy about the invention of Airbnb.

Ride-Sharing and Ride-Hailing – Everyone’s a driver these days

Imagine how your life has been before the invention of Uber. To get somewhere without a car or public transportation, you had to physically stand in the middle of the road, raise your hand, and hail a taxi. That’s crazy!

It was New Year’s Eve when co-founder Garret Camp came up with the idea of Uber, after he had to spend $800 to get a private driver that night. He immediately realized that there was a problem and that there must be a cheaper way, so he found one. Along with former-CEO Travis Kalanick, Camp founded one of the most influencing and life-changing companies of this decade.

The ability to let almost anyone become an Uber driver has created a brand new employment opportunity, and thus began the so-called “gig economy”.

Uber was the pioneer, but it’s definitely not the last. Lyft- founded in 2012- is Uber’s main competitor in the United States, Grab is controlling the Southeast Asian market, Yango is the most popular service in Russia, Dubai-based Careem is strong in the Middle East, and Chinese DiDi is taking over the world.

Ride-sharing is everywhere… Everywhere except for Israel. Our local version of Uber, Gett (formerly known as Get Taxi) was founded in 2010 as an on-demand app for taxis. It surely made our lives here much easier, but not much cheaper. Due to regulations in licensing, not everyone can work as a “taxi” driver, so Uber or similar services are just barely available in Israel.

We could have put Airbnb and Ride-Sharing under the definition of the gig economy, but we believed those inventions deserved their own paragraphs. The gig- or temporary job- economy was not invented in this decade, but smartphones and other technological advancements have digitalized it and created new ways to make a living. In the first half of the 10’s, every startup was named “The Uber of X”.

Gig-economy startups took over almost every aspect of our lives. From goods and food deliveries (Postmates, UberEats, Deliveroo, Wolt), to everyday tasks (TaskRabbit), to moving (Bellhops, Dolly), and even to dog-walking (Wag), phone repairs (Puls), and transcribing (Verbit, Rev). Everyone could get a job or at least a supplementary income.

One major player in the gig economy market is the Israeli company Fiverr. Founded in 2010, it’s one of the largest markets for freelance services. With over 800,000 freelancers providing services from graphic design to making dumb ad videos for $5, no wonder Fiverr began a sort of revolution.

Remember the days when you could walk down the street without bumping into an E-scooter or bicycle? Good days, huh?

Well, that was not so long ago. Scoot, a California-based startup, is the first scooter (and moped) sharing startup, which was founded in 2012. However, it was the appearance of companies like Bird, Lime, and services that shared scooters with Uber and Lyft that turned it into a worldwide phenomenon- for better and worse. These companies also provide another source of income that no one ever thought would exist: making money from charging electric scooters at home.

Bicycle sharing is an older idea that emerged back in the sixties, but the invention of smartphone apps and e-bikes has led to the invention of dockless e-bikes, made popular by Chinese companies Ofo and Mobike.

While it’s way cheaper than a taxi and helps citizens and travelers get around more quickly, it’s also flooding the streets. With four scooter-sharing companies just in Tel-Aviv, it’s nearly impossible to avoid the chaos, accidents, and injuries.

We know, these are two different companies, different products, and different technologies, but they share some things in common: Both launched around the same time (although WhatsApp was actually founded in 2009), both became a huge success and widely popular social apps, and both were eventually acquired by Facebook. While Instagram was bought for only $1 billion in 2012, WhatsApp was acquired for $19.3 billion in 2014.

Another major difference is the purpose of these apps. Instagram became one of the leading platforms for marketing and engaging with audiences. “Instagram models” became famous instantly, and influencers were sent to luxurious hotels worldwide for free. Teenagers used the app to show their friends how popular they are, and celebrities used the app to show the world… how popular they are. Instagram isn’t a life-changing technology, but you can’t deny its influence on this decade and on the younger generation.

WhatsApp, on the other hand, is actually a useful app that changed the way we communicate with each other. Remember the days when you had to pay for every SMS or MMS, and could only text with one person at a time? So, yeah, WhatsApp changed that, and it’s one of the greatest inventions of this decade.

Stories – Everyone’s got a Story

Snapchat was founded in 2011 and soon became one of the most popular social networks amongst US teenagers. A core reason for its rapid growth is the Story feature. Instead of dull text, image, or video, it combined all of them and let its users document their day Since the stories last just 24 hours, users will not have to worry about people seeing it the next day. Add some face filters, location and timestamps, emojis, and stickers to the recipe and you get a winning dish. So, it was no surprise when Facebook, afraid of losing the younger generation, bluntly stole the Story feature and integrated it inside their own apps: Facebook, Instagram, and WhatsApp (yes, it’s still there). Story became the hottest feature of 2016 and it still is. It gave users a new interactive way to share their boring lives with followers and let brands engage with its customers in a cool, new storytelling media.

One of the greatest achievements of the Story feature was Eva Stories. Made by Israelis, it tells the story of the holocaust from the eyes of a Jewish teenage girl living in Hungary in 1944. They’ve filmed an entire movie, divided it into seventy 15-second videos, added some texts and emojis, and shared the holocaust story with young people. Eva Stories has 1.5 million followers, and her story was viewed by millions around the world.

Chatbots – Is there anyone human left to talk with?

Chatbots are quite an old technology that evolved this decade to smart assistants, and yet, the rise of social networks and smartphone apps turned chatbots into a most-wanted feature. Many companies and brands implemented bots inside their Facebook Messenger page, or on their website, and helped customers find what they need without the assistance of others. It seems that the buzz over chatbots calmed down a bit, though there was a time when you couldn’t communicate with businesses via Messenger or Slack without a virtual assistant. But, hey, they’re still useful.

In the Sci-Fi movies of the eighties, talking AI assistants looked like an impossible future. But today everyone has a virtual assistant – inside their phone or inside their home.

The first modern voice assistant introduced to us this decade was Siri, but as for 2019, she was left behind. After Siri showed up to help you call your grandma or tell you how much wood would a woodchuck chuck if a woodchuck could chuck wood, all the biggest tech companies in the world began introducing their own voice assistants. Amazon has Alexa, Microsoft has Cortana, Galaxy has Bixby, Yandex has Alice, and Google has… Google Assistant. Based on voice-recognition abilities from Microsoft, even our team at GKI has built our own voice assistant: Robobar, made for only one thing: to make you a cocktail.

With the voice assistants came the smart speakers. They are the same voice assistants doing the same actions, except they make your home look way cooler! Alexa helps you with shopping on Amazon, Google helps you play YouTube videos on your Smart TV, and Apple HomePod helps you… well… look like someone who has money to buy Apple products.

However, jokes aside, those smart speakers couldn’t have arrived at a more perfect time: in a world full of smart products, and in the era of IoT, smart speakers help us live in an easier world and feel a part of the 21st century.

The Streaming Wars – ONLY ON NETFLIX

Video-streaming isn’t a new thing, but after Netflixs’ meteoric success, everyone wanted a bite. Netflix began streaming content to its subscribers in the previous decade and changed the way Americans watch TV, but it was the production of original TV shows like “House of Cards” and “Orange Is The New Black” that put Netflix at the spearhead of streaming services and helped its ever-growing popularity.

From that moment on, TV (and film) isn’t the same. Competing streaming platforms like Amazon Prime Video and Hulu began producing their own shows, technology companies like YouTube and Facebook began making original content as well, and two more streaming services (Apple TV+ and Disney+) just popped up to prepare for the great battle of 2020. With billions of dollars spent on content- tons of content- this is definitely the golden age for TV producers. As for “Streaming Wars”, you can be sure that Netflix will make an adaptation of it.

This the end of part I of the technologies that shaped the 2010s, and we have ten more technologies to go over on our next blog post in part II. Better stay tuned because it’s going to be interesting.
Follow us on Facebook so you won’t miss it!