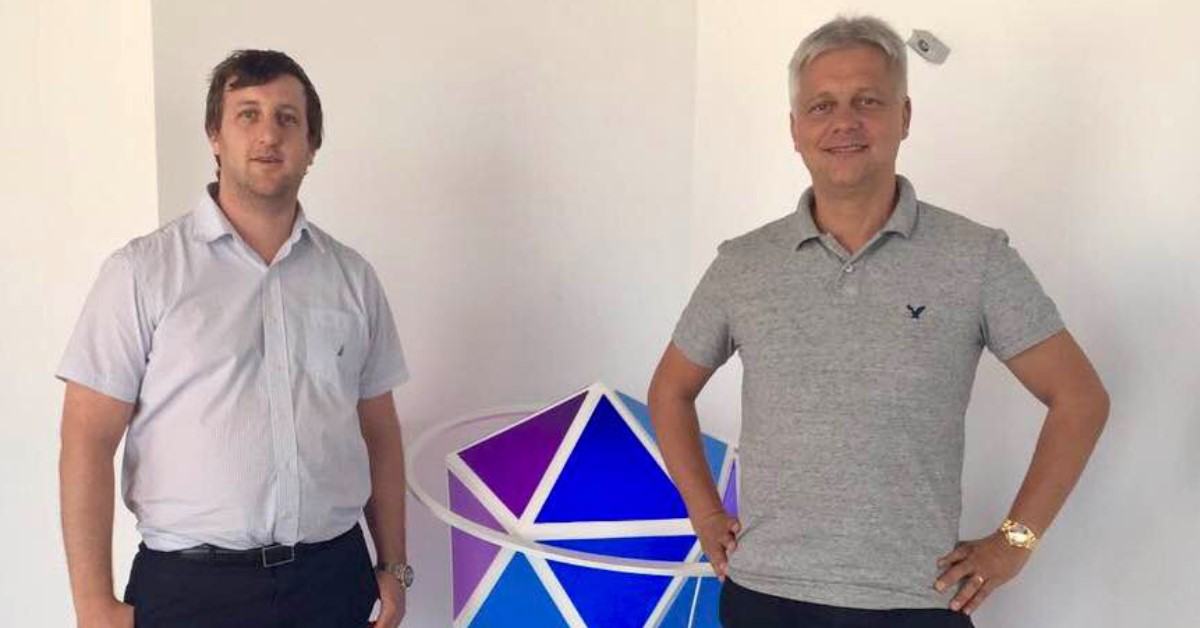 CONNECTING THE HOLY LAND TO THE NETHERLANDS

TOM VOS SPENDS HIS DAYS HELPING ISRAELI STARTUPS FLOURISH IN THE NETHERLANDS, NOW IT'S TIME TO HEAR HIM OUT.

Many companies, and some startups who can afford it, are beginning to open more international offices around the globe. As an Israeli company, you can’t only stay in Israel and expect to flourish anymore. If you’ve ever thought of opening another office in the Netherlands, we met just the guy who’ll help you achieve it – Mr. Tom Vos.
Tom, now 44, moved to Israel 25 years ago, and has since been interested in the world of startups and connecting them to Europe, or more accurately, the Netherlands. He worked in a startup for 5 years, helping companies with their business development, but most of his time was spent helping Israeli entrepreneurs run their businesses in Europe way before the Dotcom era and way before Israelis knew how to sell their products successfully. He was born and raised in the city of Alkmaar, located in the Randstad, their own “Gush Dan” metropolitan area, where everything takes place.

Currently Tom works for the Dutch government and an organization called Netherlands Foreign Investment Agency, with the mission of helping international companies, and in his case Israelis, move their businesses to the Netherlands. He approaches many companies- everything from startups to bigger brands like Teva or ICL (Israel Chemicals)- and finds that Israel is a really interesting place to do this because there are new companies on the rise all the time.

What kind of Israeli companies are you looking for?

I mostly try to attract companies in certain fields where The Netherlands has a clear added value. For example, in the field of hospitality, mainly tourism. Why? Because of companies like “booking.com”, which is Dutch, and one of the biggest in their field. There are many companies that can give useful solutions and are built around this area, and they can work together. For example, the startup “Fornova” from the Israeli town of Yokneam. This startup provides real-time intelligence to travel and retail businesses. They closed some lucrative agreements in the Netherlands, opened a new office in Amsterdam, and were able to greatly improve their marketing and sales.
Other fields that we started connecting are Agritech and water technologies, which really began evolving in Israel. In the Netherlands, there’s a well-known agricultural university in Wageningen, which is connected to Volcani Center and The Hebrew University of Jerusalem, and gives Israeli companies the option to use the Netherlands not only for sales, but also to gain knowledge.

Also, the Netherlands is one of the leading countries in water technologies and they gain a lot from connecting with Israeli water-related companies. Israel is an expert in finding ways to save water because we have a water shortage ourselves. In contrast, the Netherlands prove to be good at managing water because they have plenty, however our technologies can still help in the long run. The mix between these companies is complementary- the Israeli knowledge combined with that of the Dutch can conquer the world.

Why should Israeli companies expand their business to the Netherlands?

It’s a simple place where international companies like to be based. Large American and Japanese companies, among others, have their headquarters in the Netherlands. Part of it is due to obvious reasons such as taxes – but not only – I mean, startup companies don’t care about taxes since they still don’t make any money. The main reason that startups from Israel come to the Netherlands is that they can find a multilingual workforce, as there are many people that speak several languages. It’s an easy place to go to, and go from, good for sales and marketing.

What startups are missing is not money, it’s people. Big companies can acquire startups because of the team, not only the product. An Israeli company that wishes to enter the European market has better chances of finding good employees in the Netherlands. They are service oriented, speak multiple languages, and are experienced in international businesses. There are a lot of these personnel in the Netherlands because their country is small and always puts its efforts towards expanding outside. Israeli startups open their offices in Amsterdam to support the sales and marketing, pre-sales, post-sales and more.

Also, the Dutch government has understood that in order for international companies to base themselves in the Netherlands, they must have the ability to bring experts from other countries that can come work at that office. The government actually created a friendly environment for companies to bring in highly skilled foreign workers. So I’ll give an example: ICL opened its shared services center in the Netherlands. It’s the internal service hub for all activities – legal, procurement, HR. Their shared service is in Amsterdam. And why? Because they could bring experts from around the world to work there.

I think there are a few differences. The European entrepreneur will be more focused on the long run, less risk taking, and the Israelis are just the opposite. The Israeli entrepreneur is relatively quick and blunt and it’s easy for him to make a decision and go after it, and if it doesn’t work then he will change it. Meanwhile the Dutch entrepreneur will spend more time making decisions trying to make it work eventually. Despite these differences, you can see that Dutch and Israeli entrepreneurs can work together because they have a common cultural background. In Europe, the Dutch are considered to be very blunt and straightforward, and Israelis are the same, so that’s a common shared character trait.

In the Netherlands, someone who did well in school and was seen as a bright student, has many options to work for various interesting companies such as Heineken, ING Bank, etc- many large international corporations. Here it’s different- an Israeli guy who finishes college doesn’t have anything. He can work for Mekorot (the main Israeli water company), maybe, but there aren’t many large companies, so the natural way for an Israeli college student or army graduate is to create something by themselves and become an entrepreneur. Both the Israelis and the Dutch are very internationally oriented, and people understand that neither Israel nor the Netherlands is the target market, although it’s easier because there are just a few million people. You can find a startup there but eventually you have to expand outside, and they do that these days more than ever before. So in that perspective, the Israeli and the Dutch are quite similar.

How’s the ecosystem in the Netherlands; what can Israel learn and vice versa?

If I’m not mistaken, there are far less startups in the Netherlands than in Israel, about 1500-2000 startups. The ecosystem in the Netherlands is somehow similar to the Israeli one, but here it’s much bigger, wealthier, and it’s more mature as previously mentioned. The entrepreneurial spirit started in Israel in the 90s, whereas in the Netherlands and all over Europe, it started much later. Some of the entrepreneurs are 20 years in the industry, having failed two or three times, they have learned from their mistakes and know now much better what they can do.

I think if you look at the Israeli ecosystem, what’s unique about it is that for us it’s easy to adapt to new circumstances, so if you look at the ecosystem now it’s very different than it was 10 years ago and focused on certain industries. Where is Nanotechnology nowadays? I mean, no one speaks about it anymore, but there are other newer industries. I think that’s what’s great in the Israeli ecosystem: that it adapts itself quickly, whereas the Dutch and European ones are more stuck in their own fields of interest and it’s harder for them to develop and move into new directions. The Netherlands is leading the field of Photonics, the brains are here, it’s just that the entrepreneurial spirit is different. Innovation in the Netherlands does not just exist among entrepreneurs and young guys from the army as it does in Israel, but it’s also present within the large companies like Phillips. Phillips is a big company in the Netherlands; they invest a lot of money in innovation and they have been very successful in developing new and breakthrough products like the CD. What they realized is that they can’t develop new technologies within their own company, so they need to create spin-off companies. For example, ASML, the largest producer of machines for the semiconductor industry, was actually a spin-off from Phillips. Same goes for the company NXP.

In the Dutch ecosystem, big companies play a more dominant role than in the Israeli ecosystem, with a different source of innovation.

What actions does the Dutch government take to create a widespread ecosystem all over the Netherlands and not only in Amsterdam?

As in every country, you have a main hub, in addition to the suburbs and outskirts, with less happening. In Holland, we have the Randstad, where a majority of the people live and everything is going on. Some other areas developed with the help of universities, but it also depends on the kind of industry. For example, The Netherlands is at the forefront of seed breeding, so the development of this area is not in Amsterdam but it takes place in other areas like in the University of Wageningen which is in the center of Holland. It’s an Agritech and Footech university, the largest in Holland and one of the most well known in he world. Seed breeding isn’t happening in the metropolitan area; it’s happening where crops can grow. Same goes for innovation in the field of dairy that takes place in the north of Netherlands, as well as water technologies. In these cases, it’s not the central government who’s in charge, but the local government. There are 11 provinces and every province understands that they have to develop their own expertise, and put focus on the industry they know best.

Startup Delta, which is the organization that was initiated by the ministry of economic affairs, understood that in order to innovate in the Netherlands, you have to put money and effort into nurturing these initiatives, not just in the cities and the metropolitan areas, but also in the provinces. They’ve been very instrumental as well as other private and governmental organizations, and even the provinces themselves, to help entrepreneurs and companies in certain areas to create hubs for the industry. We have the same values in both places.

Tom Vos is currently located in Ramat Gan, at the Embassy of the Netherlands, and is willing to help you and your company connect with the right people there, to successfully expand your business to Europe. Together, the Dutch and the Israeli people, can make great things.

See you somewhere around Amsterdam!