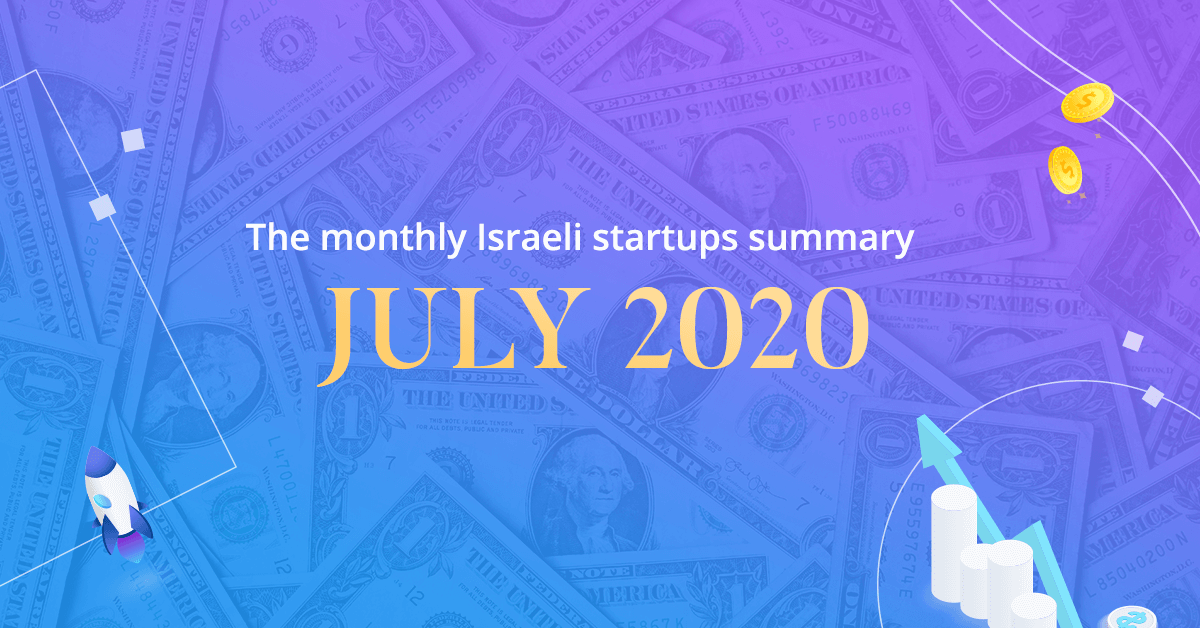 THE SECOND WAVE OF STARTUP INVESTMENTS IS HERE: $691.25 RAISED!

Summertime is officially here, and so is Coronavirus, which made a huge comeback this July. But no worries, the startups are still rocking it. How much rocking? Well, 35 Israeli startups (that we know of) raised $691.25 million!

On top of this month’s list, we have a well-known company that had already made it to the top in the past. We’re talking about our own taxi-hailing service Gett, which added a $100 million investment, bringing the company’s total investments to $913 million. Well, they surely know how to Gett investors.

We just love it when startups that were recently featured on our blog, suddenly get a huge round of investment. Sure, we probably had nothing to do with it, but we can hope!
This month, we’re talking about the blood count device, Sight Diagnostics, a startup that’s built for the era of Coronavirus and raised $71 million!

An Israeli startup with big plans for the future called Nanox Vision just closed their $110 Series B with a $59 million investment from SK Telecom and more. The startup that raised this amount in less than a year (!) is aiming to replace the old and expensive x-ray machines with a smaller, smarter, and more affordable solution for medical imaging.

Heading now to OwnBackup, the “#1 Cloud Data Protection Platform for Salesforce.” OwnBackup helps more than 2,000 organizations and companies struggling with data loss and corruption crisis. And yes, it was built especially for those human errors that employees make; mistakenly deleting loads of data and possibly losing their job as a result. OwnBackup raised $50 million this month, and a total of $84.25 million until today.

Do you know what’s more annoying than cleaning those dirty solar panels? Well, you probably don’t, so this product wasn’t made for you, but it’s pretty cool! Eccopia is the world leader in robotic solar cleaning, helping solar panels stay clean all year long and produce more energy. It’s like an iRobot for solar panels, but more useful. Now, they’ve raised $40 million from CIM. Shiny!

Let’s move on to a startup with some previous experience in the field – The Israeli Agritech startup Taranis, a complete digital agronomy solution. Using aerial-imaging from drones and complex computer vision, blended with more data from relevant sources, Taranis can identify, analyze, and treat early signs of crop threats to make informed decisions, lower costs, and maximize yield. The startup was fertilized and watered with a fresh $30 million C round investment, to help its future growth.

It’s been a while since we’ve heard of a cryptocurrency startup, but now we have Curv; a cloud-based wallet for custodians and asset managers, with bulletproof protection, instant availability, and total autonomy. Curv eliminates the Private Key flaw in blockchains with a secure, distributed way to sign transactions and manage the digital assets. Oh, and they raised $23 million. In real money.

Ever seen a Car2Go rental car driving around in Tel-Aviv or Jerusalem or… Malta? Well, the company is now called GoTo Global, and other than shared cars they’re offering mopeds, bicycles, and electric scooters, controlled and available in one single app. GoTo’s mission is to reduce the number of vehicles in cities, and they’ve raised $10 million from a guy who knows a thing or two about shared-economy: WeWork’s founder Adam Neumann. The total investment round announced this month reached $19 million.

Glaucoma treatment in just one second? Yes, you’re seeing that right. Israeli Medtech startup Belkin Laser is developing an accessible laser procedure for the primary treatment of glaucoma by means of a simple method applied in one second, at the touch of a button. Currently in the middle of testing, Belkin Laser raised $12.25 million in Series B funding.

StuffThatWorks is a new Medtech platform for finding the optimal treatment for complex and even simple health conditions. Using crowdsourcing (currently more than 185,000 contributors and counting) and machine learning, patients can research and see what treatment may fit them best. The startup raised $9 million to prove that it’s made from stuff that works (:

Heading towards a greener future, many Israeli and international startups are working to make meat alternatives, without harming any animals along the way. One of them is SavorEat, making meat with 3D printing technology that’s supposed to taste almost like the real thing. What makes their tech more unique is that the “meat” is being cooked in the process, and comes out of the printer “ready to be eaten”. SavorEat raised $3 million in July, added to the $1.75 million already raised in June.

After appearing at the Israeli version of Shark Tank (and getting invested), the innovative breast pump Annabella has done it again with a $1.4 million investment, led by two investors from the show. Annabella uses a mechanism that automatically mimics the baby’s suction, making it more efficient and quieter, compared to other products in the market.

So now after some scrolling, here’s what you really came for – the full infographic:

What a great month!

See you next time. Probably.
Don’t forget to follow us on Startup Israel Community as well!