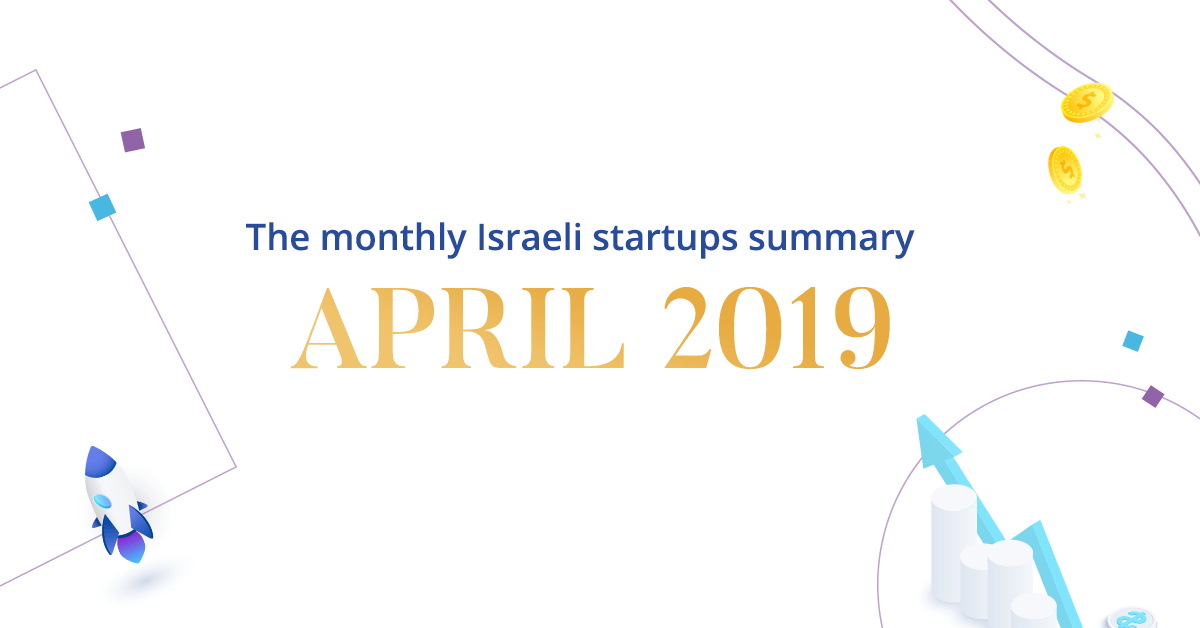 SEEMS LIKE EVERYONE FOUND THE AFIKOMAN THIS PASSOVER: 29 ISRAELI STARTUPS RAISED NEARLY $880 MILLION IN APRIL.

WOW!
We’re used to great numbers all year long, but we really have no idea why April was so uniquely outstanding, maybe it was all the matzah. 30 Israeli startups raised an astonishing total of $878 million, although most of the credit should go to Israeli-founded companies Lemonade ($300m) and Selina ($100m).

Let’s start the list with the definite winner of this month (and probably this year) – Lemonade.
The insure-tech service aiming to shake up the ancient world of insurance, based mostly in NY and unavailable in Israel, hauled a $300 million investment! SoftBank led the latest investment in the company, that raised a total of $480m; Lemonade is now worth over $2 billion. Hope they have insurance.

Second, with “just” $100m is the hostel chain Selina. Selina started with just a few well-designed hostels in Central America, but rapidly evolved, opened new hostels in 13 countries and planning on becoming a “WeWork” for digital nomads. The latest round, led by Access Industries, will help Selina expand to 130,000 beds in 400 properties by 2023.
Why is it a startup? Ask the people in R&D.

Armis Security, founded in 2013 to protect your IoT devices, just secured a $65 million investment in series C funding led by Sequoia Capital. Armis discovers all devices in the environment, analyzes their behavior to identify risks or attacks, and protects critical business information automatically.

Time to jump into the water – Aqua Security, a container security platform, raised $62 million in April to help enterprises keep their container-based and cloud-native applications safe and immune to threats. Since the company was founded in 2015, it raised exactly $100 million.

Enough with cybersecurity, for now, let’s move on to proteanTecs – A Haifa-based startup founded in 2017 (by former Mellanox founders) to predict failures in electronics, from within. We have no idea what that means, something about electronic chips and AI, but the investors were probably impressed and poured $35 million into proteanTecs. Good luck!

Imagine a world without brokerage fees. Sounds like a dream? Well, it’s really happening with Reali, the Israeli-founded startup, based in California and Tel-Aviv. Reali offers an app that enables transactions between buyers and sellers and cuts brokerage fees by paying their agents’ salaries (so you don’t have to). The startup raised $30m round B this month and a total of $60m. When will this service come to Israel?

While participating in our game of Startupurim, Bizzabo also worked on getting the real thing – an investment. Bizzabo is an event planning and management platform, offering a set of useful tools for event organizers. The new $27 million D round brings the total investments in the company to $57 million. They should organize an event for that.

What’s up, Aidoc? The AI healthcare startup just saw a new $27m investment. Aidoc is creating a single-screen tool for radiologists, that uses AI to analyze medical imaging and detect acute abnormalities across the body. The company helps doctors, helps patients and surely helped themselves with this brand new investment, that would help them get into more hospitals.

Hey, how are you doing? All good? Did you watch Game of Thrones this week? Well, unfortunately, we can’t really interact with you because we’re not using Spot.IM. Spot.IM is an excellent solution for community engagement and communicating with the audience on your website instead of losing them to other social platforms (don’t go!). Anyway, Spot.IM raised $25m, announced yesterday, the last day of April, so they made it to our list.

Jerusalem-based DIY startup Hometalk raised $15 million this month to help its ever-growing community of home design enthusiasts grow even more, while trying to grow revenues along the way. Hometalk, founded in 2011, has 10 million monthly users, 17 million registered users, and over 140,000 tutorials. They raised nearly $30 million in total, and they did it all by themselves!

Remote driving startup Phantom Auto raised $13.5 million in a series A funding. Wait, what the hell is Remote driving? Well, good that you’ve asked – It means remotely operate and monitor vehicles like trucks or forklifts from anywhere. Future much?

Audioburst, based in Palo Alto (but founded by Israelis, of course) is an AI-based voice search platform. Audioburst’s technology indexes, transcribes, and segments audio content automatically, helping Podcast creators promote their content, for example. The latest $10 million round that was led partially by Nippon Broadcasting will help Audioburst’s technology learn Japanese and expand into Japan.

Would you like to save some on your next trip? That was a rhetorical question, obviously. Splitty Travel is a new Israeli hotel-booking platform that splits your reservation at the same hotel to help you get the lowest rates. Anyway, the founders of Splitty can stop saving after raising a $6.75 million A round last month.

Remember Aidoc from few paragraphs ago? Meet its relative (not really) Theator. Theator is a personalized, AI-powered, surgeon growth video platform, helping surgeons improve and study with every operation recorded and analyzed. The investors opened up their hearts (and wallets) and gave Theator a $3m investment. 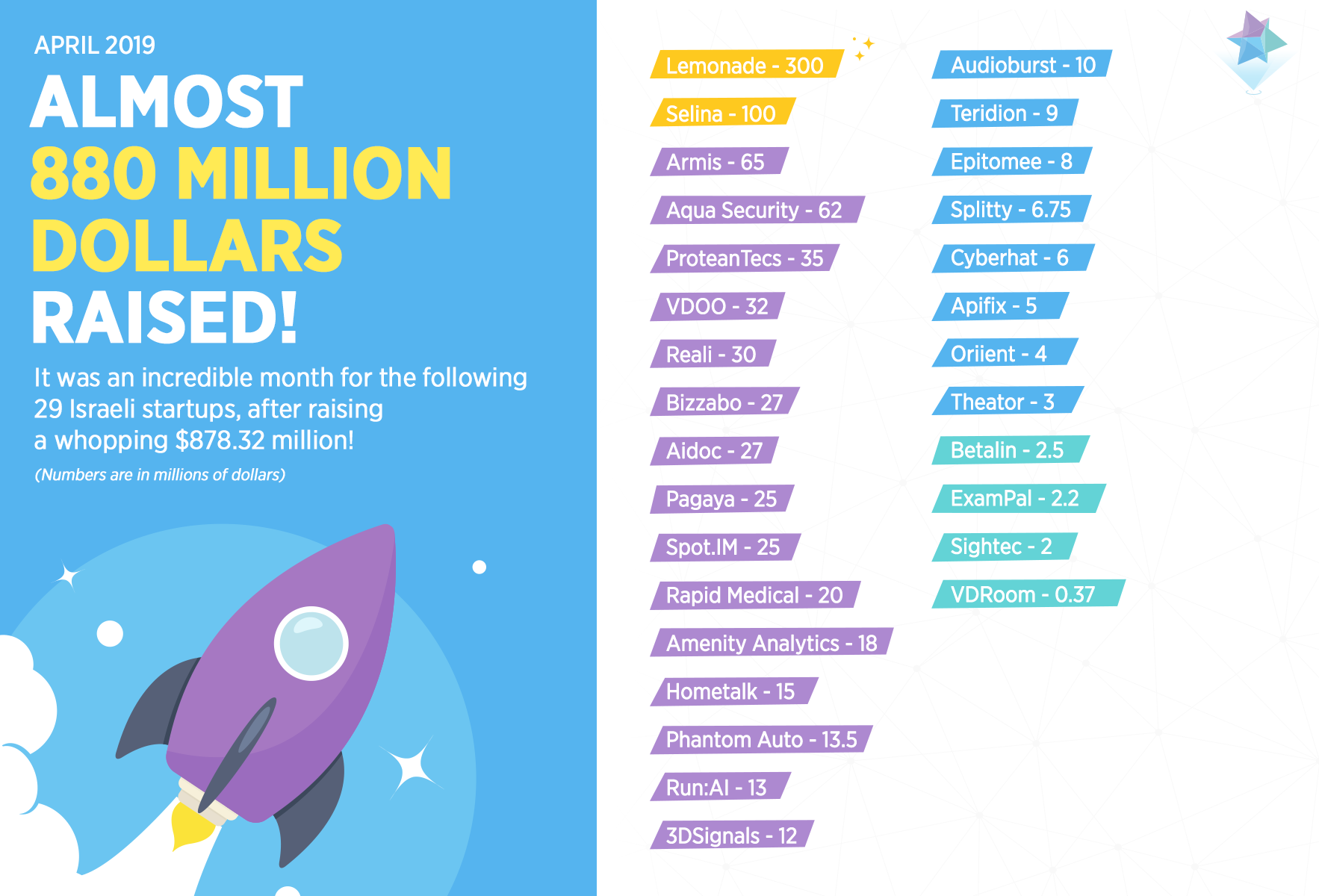