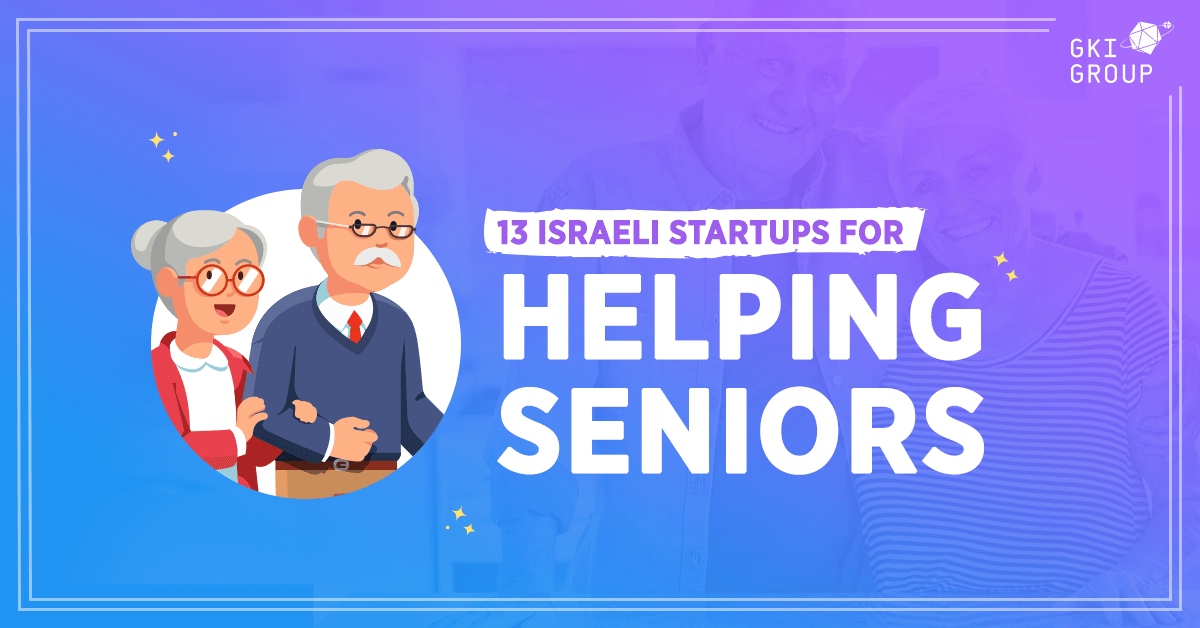 NEWER TECH FOR THE OLDER GENERATION: 13+ ISRAELI STARTUPS FOR SENIORS

With an ever-growing population of seniors, grows the need for products to make to their lives healthier, easier and happier. Here are 13 Israeli startups trying to make that happen.

Israel celebrated its 71st birthday recently, so we thought it would be a good time to show our respect to the generation who built this country and focus on the seniors. Seniors are everywhere, and their numbers are growing (obviously), and while some are still “as healthy as a horse” and living a happy life, many others’ health conditions are deteriorating while their loneliness grows. In this article, we’ve decided to introduce you to a number of Israeli startups for seniors from wearable devices, new products, services and apps. Time to explore some newer technologies for the older generation.

Don’t let the name mislead you, Hip Hope is undeniably a product made for seniors. The Hip Hope is a smart wearable device, a belt that detects falls and collapses and opens instantly, like an “airbag for the waist”, protecting older adults from hip fractures. Well, now the name makes much more sense!

Oxitone is the first FDA-cleared wrist blood oxygen sensor that monitors blood oxygen, pulse and temperature, directly transferred to the patient’s physician. The doctor can track his patient anytime and anywhere, and receive a live update about his health condition, and recognize problems before they happen. Oxitone Medical was founded in 2010 and has raised over $7 million.

Almost like Oxitone, Vitalerter developed a Bio Patch that monitors older patients and alerts their caregivers, but while Oxitone was made for home-use, Vitalerter is being used by patients in nursing homes and long-term care. The unique biosensor reports in case of an emergency to the staff and has features like fall and pressure ulcers prevention, irregular breathing alerts and heart incident alerts.

A new-ish startup, Sit N’ Stand is exactly the product your grandparents or parents may need. Sit N’ Stand [Full disclosure: GKI Group sits (and stands) on the board of this company] is a portable, smart rising seat developed to help the elderly maintain their independence as long as possible. They can place the inflatable seat on any chair/sofa and use a remote to help them sit… and stand. The product is being sold in dozens of stores across the UK.

Forget about Bird, Lime and Wind, the seniors deserve their own scooter. Well, don’t deserve, need. Mobility scooters are imperative for people with disabilities, MS (multiple sclerosis) and the elderly. Moving Life built a new kind of lightweight mobility scooter called Atto, that can be folded to the size of a trolley suitcase and has other “techy features” like a USB port and an adjustable seat.

You know how we love “laughing” about how our grandparents are pretty much allergic to technology and can’t handle a smartphone? Well, the Israeli company E2C (Easy To Connect), founded in 2012, is developing a bunch of products for those who cannot handle technology under the brand “Basic” (Basic Smartphone, Basic Tablet, Basic Smart Home Phone). The Basic Smartphone (sold in EU as “Simple Smartphone”) is a unique phone with intuitive and instructive large buttons, easy to use and helps keep our grandparents connected to the world.

Probably one of the most “famous” startups among the Israeli startups for seniors, Intuition Robotics is the company behind ElliQ, a robot made to help seniors feel less lonely. With ElliQ, they can easily connect with family and friends using video or audio, share photos, receive curated news and reminders and play cognitive games to help their memory. ElliQ is available for pre-order at $1,500. Intuition Robotics has raised $22 million.

Imagine that your grandparents had their own streamer, a smart TV, tailored to their needs?

That’s what Uniper Care Technologies is here for. The company, founded in 2015, raised $3 million to develop an end-to-end solution turning any members’ TV into an interactive personal companion. Using both a web camera and a TVBox, the user can join a community without leaving his/her house, with live sessions and group activities such as workout or meditation. The guide or caregivers, on the other hand, can use the camera to follow each users’ progress.

Don’t you just hate it when your grandma mistakenly posts embarrassing details on your Facebook timeline? Well, joking, but maybe it’s time that your grandparents, or especially lonelier senior citizens, have their own social network. Alotok is a new startup, founded earlier this year, to create a social network for seniors using a technology they know how to use well: a phone. The app matches people based on language and shared interests, and connects them via phone calls to make safe, meaningful new connections. Sounds promising.

We wrote about Tamaringa recently, in our article about startups founded by women, and this is what we wrote back then: Recent studies show that personalized music sessions can help alleviate symptoms of Dementia. Tamaringa builds customized playlists to improve the daily lives of Dementia patients and their caregivers, based on a certain class of older adults with similar profiles and tags.

Another service using the healing powers of music is 2Gether, a new startup founded in 2018, to help seniors fight loneliness. The app is connecting between elderly people and family, caregivers or volunteers using music. 2Gether creates personalized music playlists and enables them to share their listening with others, talk about the music being played, or anything else.

MyndYou is a platform that uses AI to analyze a senior patient’s cognitive skills, tracking them continuously and helping in cases of Alzheimer’s or Dementia. How? First, an app will test the patient with parameters like voice analysis, then compare it with the previous tests, and finally analyze and alert if there’s any cognitive decline. MyndYou was founded in 2016, has raised $500K and was awarded a $900K grant.

Selfit is a digital therapy solution to improve the mobility and cognitive skills for chronic patients. Their patented technology, that uses AR, machine learning and big data were built on the principles of Neural Plasticity and Motor Learning Theories. Selfit Medical is still in the works, and would be available in the future, but it’s worth following.

One more Israeli solution trying to fight loneliness is Zeppi, a personal communication balloon system that combats elderly loneliness with video visits that feel entirely real. With Zeppi, a large high-res screen inside a helium-balloon, family caregivers can easily “drop-in” for spontaneous chats, visual check-ins, and quick consultations around the tens of issues that arise every day. Sounds (and looks) like the future.

These are only a few of the Israeli startups for seniors to help their ever-growing population. It’s wise financially because the products are needed and will be needed in the future, but it’s also inspiring to see how the younger generation is inventing technologies to help their elders. We know that one day when we turn 80, 90, or 150, we’ll be thankful for these innovative startups.