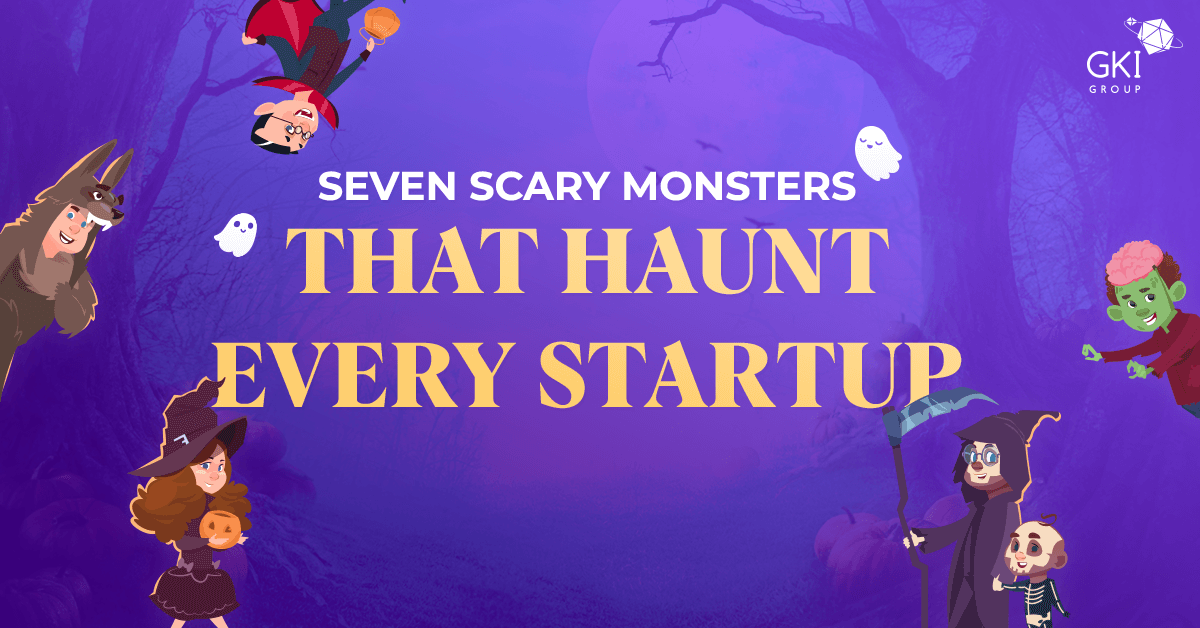 7 SCARY MONSTERS THAT HAUNT EVERY STARTUP

Zombies and werewolves and mummies, oh my! They may not exist in real life, but the struggles that founders stumble upon when starting a new business are very real- and just as scary! For this Halloween special, we write about seven real startup struggles, reimagined as creepy monsters. Muhahahaha!!

Halloween is here, the fun holiday for kids and grownups, going trick or treating, dressing up in scary costumes, and watching horror movies. However, not only do monsters exist in movies and costumes, we are also surrounded by them in real life. New startups and entrepreneurs are facing them every day, hoping that their company will be “the one that makes it out alive”.

So, in this “spooky” article, we’ll go over the scary monsters every startup faces.

Zombie – Your startup is dead but keeps on walking anyway

Zombies, the slow-walking creatures that are always looking for brains, are pretty similar to a startup that failed a long time ago, but is somehow still trying to stay alive. Startups become zombies when there are no more new users, the growth is stuck, funds keep running out, and there’s nothing you can do to attract new or your existing investors. You just keep on walking dead, waiting for a miracle. Instead of shutting it down like you should have a long time ago, , you’re still looking for “the brain”: a brilliant idea or buyer that may save your startup, and give you something to live on.

But hey, even if your startup is a zombie, not everything is lost. Take a look at InnerSloth, the developers of the game Among Us. The three developers sitting in the company launched the game for iPhone and Android back in 2018, and probably were really bad at marketing, or had no funds for it. They had only 30 daily users, had to spend all their savings to keep the game alive, and release updates to the few users they had. Earlier this year, probably thanks to Coronavirus, Among Us suddenly became noticed. Popular YouTubers and gamers began streaming their gameplay online, and the game totally “blew up”. Now, they have over 80 million users and incomes of millions of dollars. Looks like they’re no longer a zombie.

Ghost – When Your Startup “Disappears”

Becoming a ghost means disappearing, turning barely visible (or visible to people with supernatural powers), and while not all ghosts are as friendly as Casper, most of the startups are not as successful as Casper.

Your startup may start slow, or it may start with a bang, but fading out is practically inevitable unless you do things right. There are many causes of disappearing: Your app or game was interesting for a week or month and then users got tired of it, a new competitor took all the attention, your product became obsolete compared to the market, or other shifts and turns in the world made your idea suddenly useless (Hello there, travel startups).

Always prepare yourself for the real world. Read the reviews. Understand your users. Don’t let the customers “ghost you”, and don’t become a ghost yourself. But most importantly, don’t let these failures haunt you. Try and learn from them.

Vampire – Your Startup keeps on sucking your blood and savings

Vampires have become pretty popular in recent years. The blood-sucking night creatures (with so many dumb weaknesses like garlic or holy water) are no longer scary. Vampires are now “sexy”, just like starting your own company and joining the startup life.

Unfortunately for the founders, there’s nothing sexy about a startup that turns into a vampire. They soon begin to realize that the project is sucking their “blood”, their free time, quality time with the family, and all their savings at least until the investors arrive. Just like a vampire, you probably won’t see the sunlight. You work so hard until you can’t even see yourself in the mirror.

What should you do? Slay the vampire. Try maintaining a stable work-life balance. Your startup will be fine, your sanity won’t.

Werewolves are human. Well, at least most of the time. They can shift themselves into werewolves, or are cursed to become one uncontrollably, once a month, when a full moon is rising.

While history tells the story of some undeniably successful pivots like Slack (it was a game!) or Instagram (just a regular photo editor with filters), there are some startups whose pivot turned deadly. Kik Messenger was a pretty successful private messaging app founded in 2009, with millions of active users, but in 2017 they decided to focus on the next big thing – cryptocurrency – and launched Kin. After a successful $100 million raised in ICO for the new coin, troubles began. Last year, The US Securities and Exchange Commission (SEC) sued Kik for allegedly running an unregistered securities sale, hence hiding information from new or existing investors.

Kik Messenger nearly shut down last year, to focus on the lawsuit and try to make the most of Kin.

They turned into a werewolf and lost all their identity and integrity.

Mummy – All wrapped up in paperwork from head to toe

Starting a new business is exciting and challenging, but one of your roles as a Founder and CEO also includes dealing with lots of paperwork: from legal paperwork to finance, from business strategy to product characterization, and it never seems to stop, not even after you hire a team to do it for you.

Getting tangled up with the paperwork and presentations may lead to sleepless nights that suck out your joy and will to live until you become a “zombie” wrapped up in paper: just like a mummy.

Trolls – The most annoying creatures on the internet

A troll is an ugly and scary dwarf from Scandinavian folklore, but it’s also the nickname for the most annoying people to ever exist since the invention of the internet.

Internet trolls mean trouble mostly for social networks, apps, forums, and wherever user-generated content is the main feature of the platform. But they appear in any online community that enables leaving comments. Internet trolls can hit you online, wherever you are, whether they simply want to or are getting paid for it.

They’ll cyberbully other users, publish off-topic or offensive content, slander your product or other users, or spam the hell out of your platform. It’s annoying, unpleasant, and might be deadly for some startups.

One example of a startup that shut down due to its thriving trolls community is the Secret app. The anonymous social network app launched in 2013 to enable users to “say whatever is on their mind”, without identification and without restraints. It was a HUGE success, but with all the amazing content,  the internet trolls were soon to follow, using anonymity to shame, harass, and cyberbully other people. Secret couldn’t handle the bad news coverage and the ditching of users (to its competitor, Yik Yak) and they shut down the business in 2015, just 18 months after it launched.

It’s hard to get rid of trolls, and you can’t make them disappear completely. However, there are ways to reduce the damage: Hire moderators to filter content and work nonstop, use AI to block spam and blacklisted words, add a report feature, make registration harder and for verified users only, and don’t let in anonymous users. If you’re being trolled on another website (product reviews, article in a news website, etc.), the best thing you could do is contact the owner.

Grim Reaper – May your startup Rest in Peace

The Grim Reaper is the most famous embodiment of “Death”, if it had a “human” form. You know how it goes – once the grim reaper shows up, someone is going to die. This someone is your startup.

After losing battles with zombies, ghosts, trolls, vampires, werewolves, and mummies, sometimes the best you can do for yourself, your employees, and your company is to kill it. Shut it down. But don’t you worry – just like death, it’s totally natural. More than 90% of startups never make it to the end. Not all of the endings are equal; some shut it down because they’ve failed or went bankrupt, and others shut down for legal reasons. Some shut down after six months and others after 20 years, but there’s always a reason.

What’s left is just to let go. Learn from your mistakes and move forward. Start a new business, use your experience to join a company, or even find a new direction in life and become a yoga instructor.

The startup may rest in peace now. Your life has only just begun.

Well, if you’ve reached the end of the article, you’ll most likely survive a zombie apocalypse or global pandemic. The text may seem pessimistic, but, eventually, all monsters can be beaten. You just need some good people on your side, listen to advice, and listen to yourself. Don’t let yourself suffer. Don’t sit through 90 minutes of a B-rated horror movie in the cinema. It’s sometimes okay to quit.