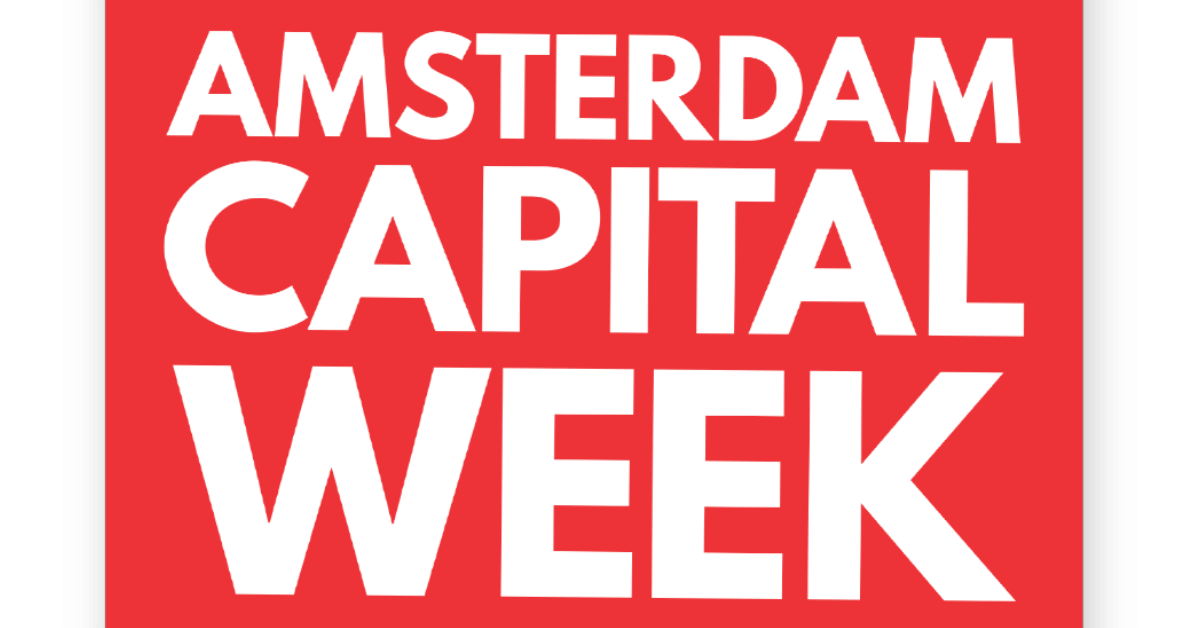 MEETUPS, SESSIONS, MEETINGS, INVESTORS AND ONE ISLAND FULL OF THE ABOVE - HERE'S OUR SUMMARY OF AMSTERDAM CAPITAL WEEK.

MEETUPS, SESSIONS, MEETINGS, INVESTORS AND ONE ISLAND FULL OF THE ABOVE – HERE’S OUR SUMMARY OF AMSTERDAM CAPITAL WEEK. 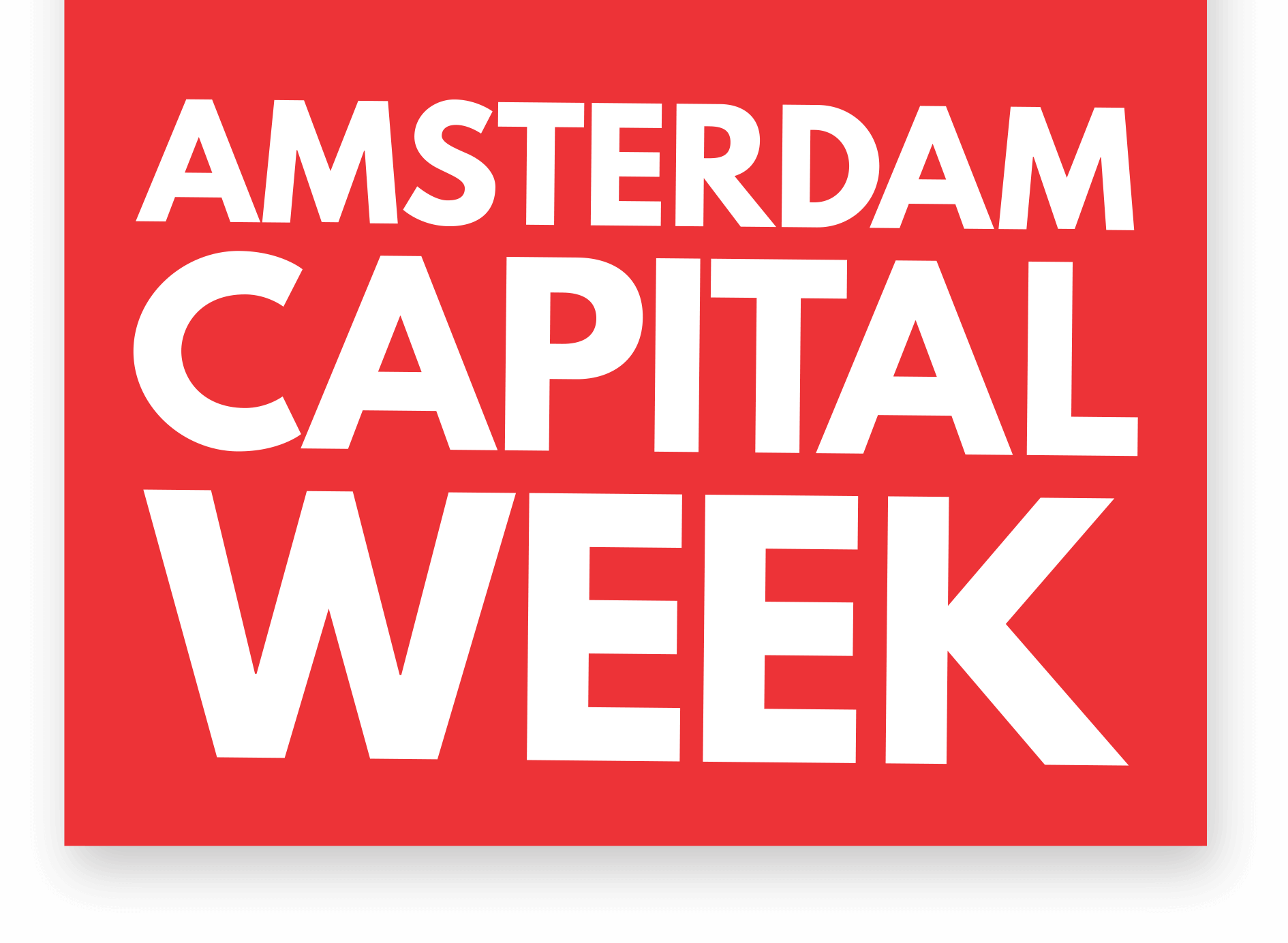 With each year passing, Amsterdam is pushing itself to the forefront of the European innovation. How? By deepening the connections, cooperating with international companies, and of course – arranging incredible tech events, all year long. The biggest and most popular one is The Next Web, but we’re here to introduce you to a smaller, yet more meaningful event – Amsterdam Capital Week.

Amsterdam Capital Week might be the Dutch version of Israel’s DLD: A week in September full of tech events and meetups, arranged by top companies in the local ecosystem. The main difference is that Capital Week is more focused on connecting startups and investors, creating various opportunities for local and foreign entrepreneurs. We were also invited to one of the exclusive events this week, Angel Island, but we’ll get there later.

We knew that during the official events we might run into known faces and people, so we decided to dedicate the day before Amsterdam Capital Week to meeting with new factors and businesses in the Netherlands, who might aid GKI and M&H’s operations in the Netherlands. First, we went to Hotel 27, where we met a guy called Eric who runs the hotel. He showed us around: The hotel has 16 AMAZING and luxurious suites and one of the best cocktail bars in Europe. Hotel 27 is where the mega-celebrities like Madonna or Kanye West stay in Amsterdam, along with some VIPs like Prince Constantijn of the Netherlands. We talked about working together, hosting events, and of course, we talked on and on about M&H distillery. Afterward, we went to the new Mindspace co-working space, and they told us they’re about to open a new one in Dam Square. Better grab an office space soon because that’s the best location in the city.

Another person we hoped to meet and did meet with was Robbert Baruch, Manager Public Affairs for Buma/Stemra, the Dutch collecting society for authors rights. He talked with us about ADE, Amsterdam Dance Event, the Amsterdam Capital Week of the music industry. During a week packed with DJs and musicians, ADE also manages to fit in talks about the future of music, technologies, products and even hold relevant hackathons with companies like Shazam or Spotify. We hope we could find a way to collaborate with ADE in the future. 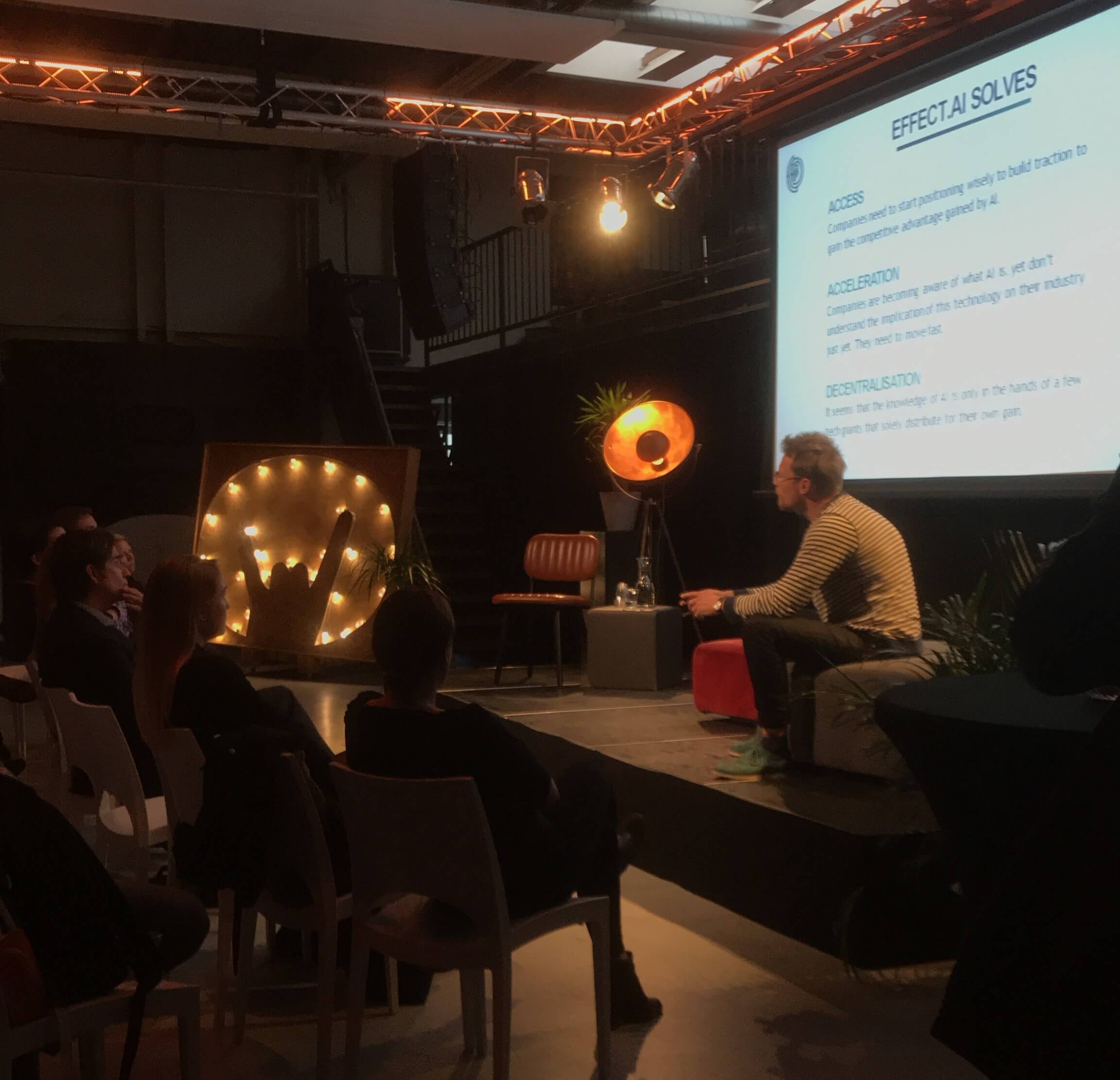 This day marked the official opening of Amsterdam Capital Week. There were many events held in different locations all around the city, so we took a taxi and hopped between events. It was nearly impossible to make it all of them, and we soon realized that most of them were irrelevant to us and evolved around the industry in Europe. However, we were amazed to see how well the events were organized, compared to the dull level of organization of some major events in Israel.

One of the mini-events we went to was Amsterdam Venture Day, where local startups and scale-ups showcased their products to investors. A whole matchmaking event. The tight schedule contained pitches on stage, roundtables and endless networking to help local entrepreneurs and startups find their next investment.

In the evening we went to StartupDelta’s event with the Embassy of the Netherlands in Paris, where they conferred about ways to help Dutch startups infiltrate the French market. The host, Katja Berkhout, International Director at StartupDelta, immediately recognized us from GKI Group and came down to talk with us. More people paid attention to “The Israeli guys.” Katja explained how she managed to “bring” CES from Las Vegas to Amsterdam and about the pre-events they’re having locally. 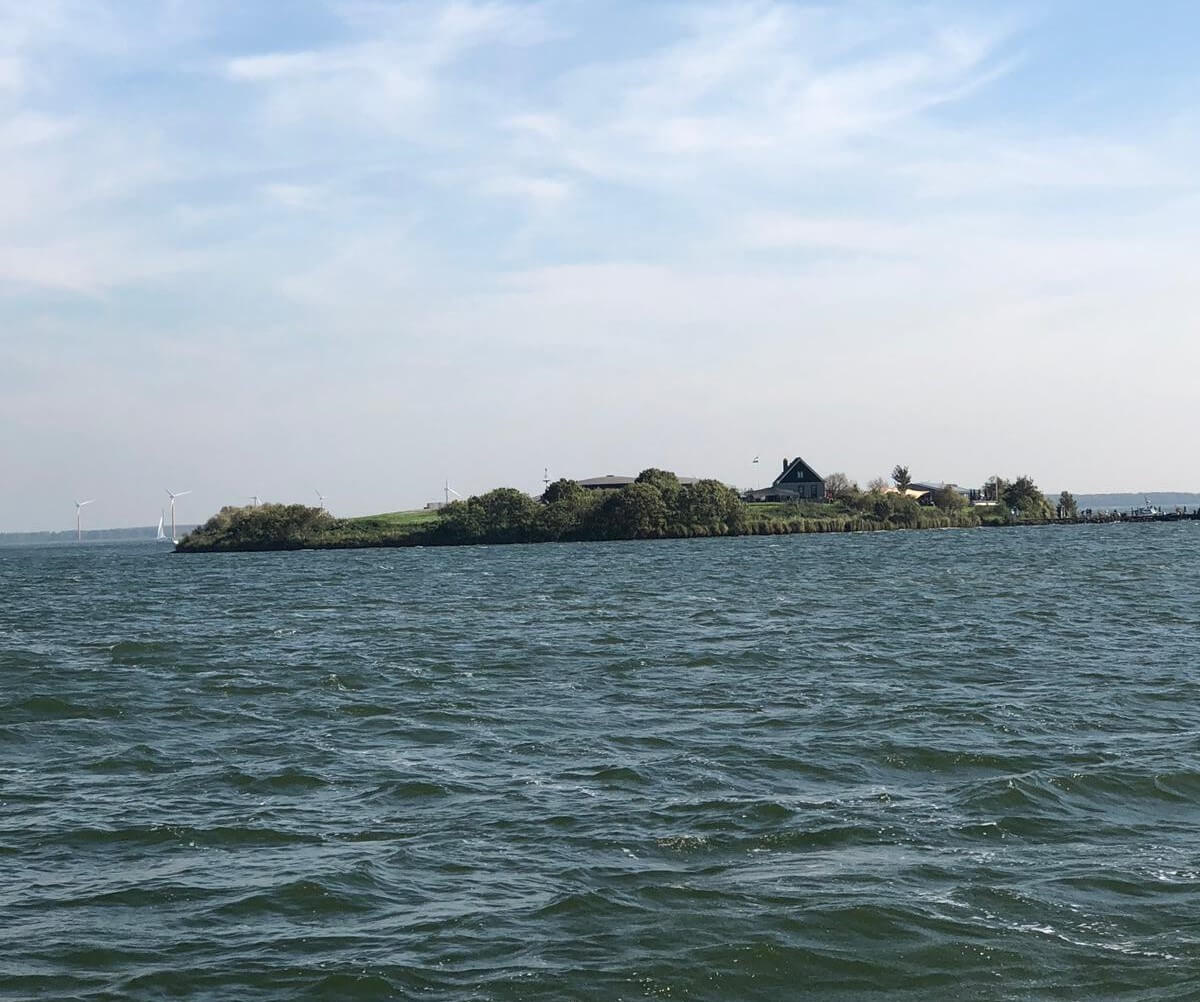 Time for the event we’ve been waiting for – Angel Island.
A whole-day event, arranged by our pal Ton van ‘t Noordende and Denis Ahrling that brings together well-selected 500 participants from 80 countries. 250 investors and 250 entrepreneurs. All located on one island for a whole day (sounds like the beginning of a new reality show) to mingle, meet and network. No suits, no ties, no laptops, just people. Just connecting socially to create something more significant.

We came early morning to hop on the boat that will take us to Pampus, a tiny artificial island near Amsterdam, where Angel Island took place. To our surprise, the entire operation was handled magnificently by more than 50 volunteers and sponsors. We boarded different boats so that we could mingle with different people all the way to the island.

On the island, we met with everybody we know from our previous visits and the NLxIL lunch: Baas from StartupAmsterdam, Prince Constanijn, Boris the founder of TNW, Ilan Goudsmit from Endeit Capital and more. Moreover, we met some Israelis like Yossi Vardi, One of Israel’s early entrepreneurs and the man behind DLD, and Yosef Ben-David who lives in the Netherlands and has a family business of watches and jewelry. We also went to different sessions, one about meditation and the other about “How To Fire Employees.” Our boss found it very useful.

The greatest thing about Angel Island was meeting new people, and to our surprise, most of the attendees were angel investors or representatives from VCs and private equities. They outnumbered the number of entrepreneurs and founders. We met with investors seeking for startups in Israel, with accelerator managers and even with Patrick Studener, Head of EMEA at Bird. We immediately sent him the link to our article about Bird that we published just a few days earlier. 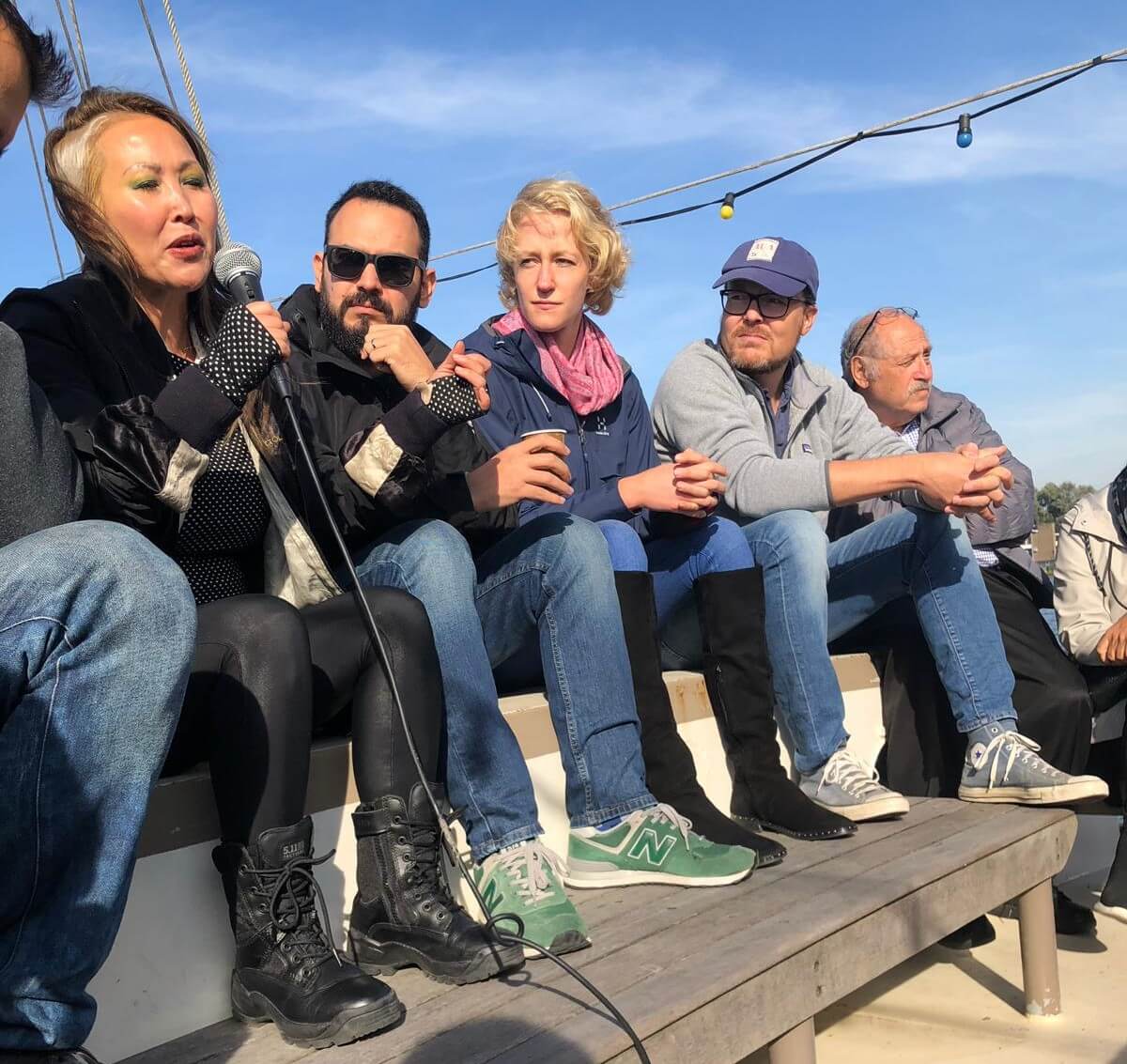 On the way to Angel Island: Yossi Vardi (to the right) and Prince Constantijn of the Netherlands (Next to him)

All in all, Angel Island was a unique experience, and it should be as an example to other tech events around the world. A “boutique” event, with all the right people, gathered together on one island for hours of mingling, listening, learning and connecting. It was an excellent idea for GKI Group to show presence during Amsterdam Capital Week and not only during The Next Web. It’s proof that we’re now part of the local ecosystem, the people that know how to connect the Netherlands to Israel and work together for the benefit of both startup countries.