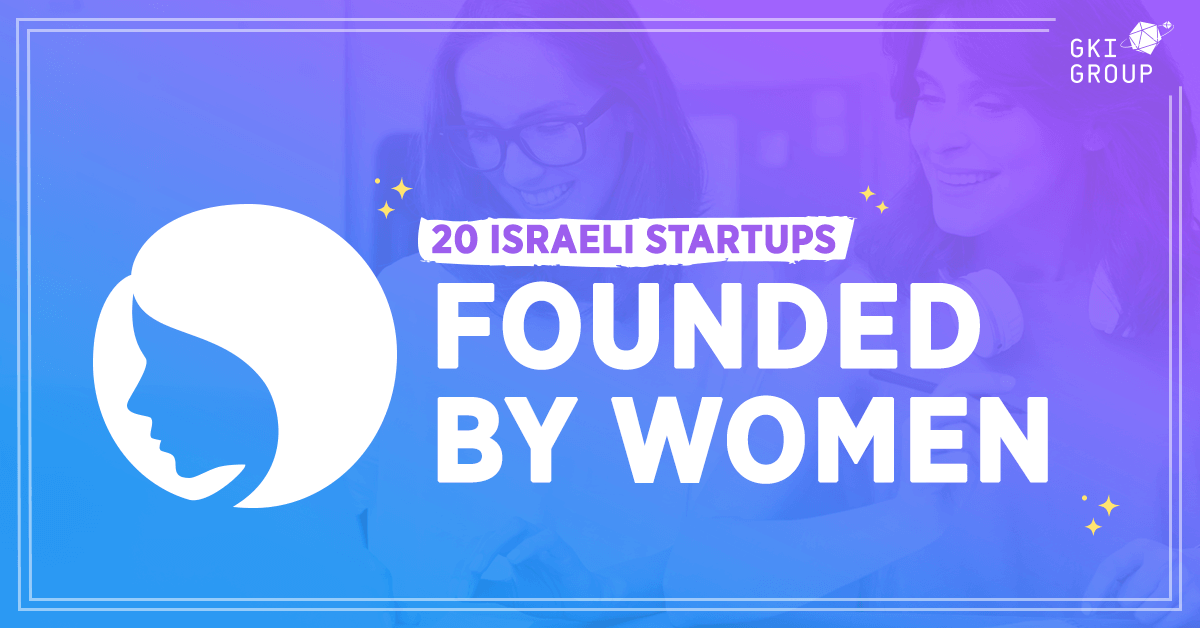 ONLY 10% OF THE ISRAELI STARTUPS WERE FOUNDED BY WOMEN, BUT THAT STILL MEANS THAT THERE ARE HUNDREDS OF FEMALE ENTREPRENEURS IN ISRAEL. TO HONOR INTERNATIONAL WOMEN'S MONTH, WE ARE FEATURING 20 OF THEM.

Israel, the grand Startup Nation with over 6,700 active tech companies, is no stranger to successful female entrepreneurs, and yet, only 10% of these startups were founded by women. So, to honor International Women’s Day (and month) we decided to write about twenty interesting and innovative Israeli startups founded by women. Most of the startups were co-founded by women who took the role of CEO, others were founded solely by women, and one of them is employing only Haredi women! There are hundreds of women-led companies, which made the curation of this list rather challenging, but we’ve managed to pick startups from every popular category: Medical, AI, eCommerce, Cybersecurity, Fintech and much, much more.

Co-Founder and CEO: Yael Weiss Gadish, the former CEO of Snunit Warehouse and lead Strategist for the Jewish Agency.
Founded: 2016
About the Startup: An app that we personally love, Bitemojo is offering self-guided culinary tours and experiences in different cities around the world to help travelers explore better and taste the local dishes and secrets.

Co-Founder and CEO: Tal Rubinstein, who previously worked in a law firm before thinking of Shupperz. You can read the full interview we had with Tal here.
Founded: 2017
About the Startup: Shupperz is a Social Commerce platform that enables you to shop around the world with local personal shoppers (shuppers) who know all about the best brands, the hottest sales, and the best outlets. Currently available only in NYC and Israel.

Co-Founder and CEO: Sari Roth, a Haredi (ultra-orthodox) entrepreneur, who founded the company along with Tzvi Cohen after they worked together in a previous company.
Founded: 2014
About the Startup: Bontact is a platform that enables businesses to connect with their online customers in real time using chat, messaging apps, text, or voice. The startup, which started in KamaTech, boasts a client list of many large companies in Israel and raised $2.1 million so far. Impressive.

Co-Founder and CEO: Chedva Kleinhandler, a Haredi entrepreneur, one of the first to open a style blog in Israel, and a founding member at Dreamers // Doers. You can read the interview with Chedva here.
Founded: 2015
About the Startup: Emerj is a white-label app that connects employees and mentors to provide timely and confidential career advice on demand.

Founder and CEO: Ruthie Margalit, who is also the founder of i-rox; an outsourcing company for Haredi women. Her new startup, Membit Bot, employs only Haredi women as well.
Founded: 2016
About the Startup: An off-the-shelf chatbot solution for organizations, with ready-to-use processes that can be integrated with CRM and ERP easily such as managing service tickets, making appointments, retrieving the status of billings and payments, and more.

Co-Founder and CEO: Einat Metzer, who was also among the founders of the “Yazamiot” organization and led the investments at Gemini VC
Founded: 2015
About the Startup: Emedgene, the world’s first completely automated genetic interpretation platform, just popped up in the news last month after raising a $6 million A round. In 2018, the company also received an 18K grant after being selected as the #1 most innovative healthcare startup by the Israeli Prime Minister and Innovation Authority.

Founder, COO & Chief IP Officer: Karina Odinaev, with a B.A. in biology from the Technion, was COO and product manager of Liquid Comp Bit and she was a software engineer at Zoran Corporation.
Founded: 2007
About the Startup: The oldest company on our list, Cortica is ushering in the next generation of AI with revolutionary, self-learning technology that simulates the natural processes of the mammal cortex. Cortica raised nearly $68 million since its foundation.

Co-Founder and CEO: Anastasia Logvinenko, hackathon lover, Technion graduate, and co-founder of NowTecc with Taly Bonder and her real-life partner, Tal Yahav. We had an interview with Anastasia here.
Founded: 2017
About the Startup: NowTecc solution helps customers understand what characterizes successful visual content for online platforms and target audiences. They match the customer’s data with their image recognition algorithm. By learning the customer’s creative world, NowTecc provides actionable insights – saving precious time and generating a deeper understanding of audiences, markets and competitors.

Co-Founder and CEO: Ruth Polachek, who is also the founder and Chairwoman of She Codes and worked as the Head of Citi Accelerator. She was named as one of the 50 most powerful women in Israel by Forbes in July of 2018.
Founded: 2016
About the Startup: Fincheck is an artificially intelligent financial assistant, a solution to take care of expense reporting. The chatbot gathers credit card transactions, helps the user manage them better, and makes sense of all the data.

Co-Founder and CEO: Ayelet Carasso-Sternberg, who worked in the advertising industry and founded Genie along with Doron Marco and Professor Dan Ariely, who also invested in the company.
Founded: 2010
About the Startup: Genie is a “Nespresso Machine for Instant Meals.” Enter the G-Pod into the machine, push the button, and get a delicious and nutritious meal in one minute. The company raised $10 million!

Founders: Lea Cohen-Saban, Stella Melnitzer-Beris (Both Co-CEOS), and Dr. Miriam Allalouf (CTO). Lea worked at a nursing home for the elderly and partnered with Stella- who studied with her- and with Miriam, who was her lecturer at Azrieli College of Engineering.
Founded: 2017
About the Startup: Recent studies show that personalized music sessions can help alleviate symptoms of Dementia. Tamaringa builds customized playlists to improve the daily lives of Dementia patients and their caregivers, based on a certain class of older adults with similar profiles and tags.

Founders: Dr. Sharon Haramati Rodrig and Dr. Ravid Shechter, both hold PhDs in neurobiology from the Weizmann Institute of Science
Founded: 2012
About the Startup: A device for mothers of newborns, as the founders were, that monitors breastfeeding: Scans the milk, the process, and gives personal insights about health, nutrition, and breast pain.

Co-Founder and CTO: Dr. Shimrit Tzur-David, who received a Ph.D. in computer science from the Hebrew University of Jerusalem and worked in the field and as a lecturer for the past 15 years.
Founded: 2015
About the Startup: SDO is offering a high assurance password-free authentication for identity and data protection of users and objects. The technology is based on algorithms initially developed to protect nuclear launch codes.

Founder & CEO: Iris Shoor, a serial entrepreneur, also co-founded VisualTao (acquired by Autodesk) and Takipi (now known as OverOps) before Oribi.
Founded: 2015
About the Startup: Oribi helps businesses easily understand website results and provides them with the most actionable info they need. The company has hundreds of paying customers and raised a $7 million B round last month, and we expect great things ahead.

Co-Founder and CEO: Hani Goldstein, who worked as an attorney with a degree in Law from IDC before coming up with the idea of Snappy.
Founded: 2015
About the Startup: Snappy is a platform that enables employers to give their employees a fun and engaging way to choose any gift they’d like from a collection that suits them best. Snappy Gifts has offices in NY and Tel-Aviv and raised nearly $10 million in total.

Founder and CEO: Smadar Landau, a serial entrepreneur who sold a few smaller startups in the past, and a dear friend of GKI Group.
Founded: 2013
About the Startup: Feelter developed an algorithm to monitor conversations on the web to give users an accurate review about products they are considering to buy. The score is calculated by the wisdom of the crowd and is built from relevant user-generated content such as mentions, photos, and videos that are also displayed to the customer. Feelter had a few investments totaling $4 million (GKI Group was one of the investors) and also won the Grand Prize in the G-Startup Worldwide contest awarding them $250,000.

Co-Founders: Adi Biran (CEO) and Lihi Gerstner, who met while studying architecture at Columbia University. They founded Splacer along with Lior Ash (CTO).
Founded: 2014
About the Startup: Similar to an “Airbnb for events” where people can book a relevant event venue instantly for any cause like parties, meetings, launch events, productions, film shoots, and more. Currently available in NY (also where the HQ is), San Francisco, Los Angeles, Miami, and Chicago.

Co-Founder and CEO: Yael Vizel, the first woman to command the Israel Air Force (IAF) Telecommunication Officers course and its crews, Electrical Engineering graduate from the Technion, and worked at Elbit where she met the other co-founders.
Founded: 2013
About the Startup: An innovative platform that allows shoppers to try on clothing virtually before purchasing them online using patent-pending image processing. Zeekit raised $9 million, partnered with ASOS, and just recently announced a collaboration with Macy’s.

CEO: Lital Kalkshtein, our boss (: Although she’s not the founder of GKI Group, she was here since the foundation, and has helped bring the company to what it has become today. Lital is also in the board of directors in our portfolio companies, a founding partner of the Israeli Startup Lobby, a partner and director at M&H distillery, and she manages all current and future projects we have here at GKI.
Founded: 2012
About us: Well, check the About Us section.

These 20 Israeli startups founded by women are just the tip of the iceberg and there a few hundred more we could have talked about, but compared to the number of startups founded and managed by men, there’s still a lot of improvement to do. We hope more women with a passion for inventing, initiating, and making a change will build more and more successful Israeli startups. We don’t just want the “Captain Marvel” and “Wonder Woman” of the industry. Let’s make female tech entrepreneurs a standard!