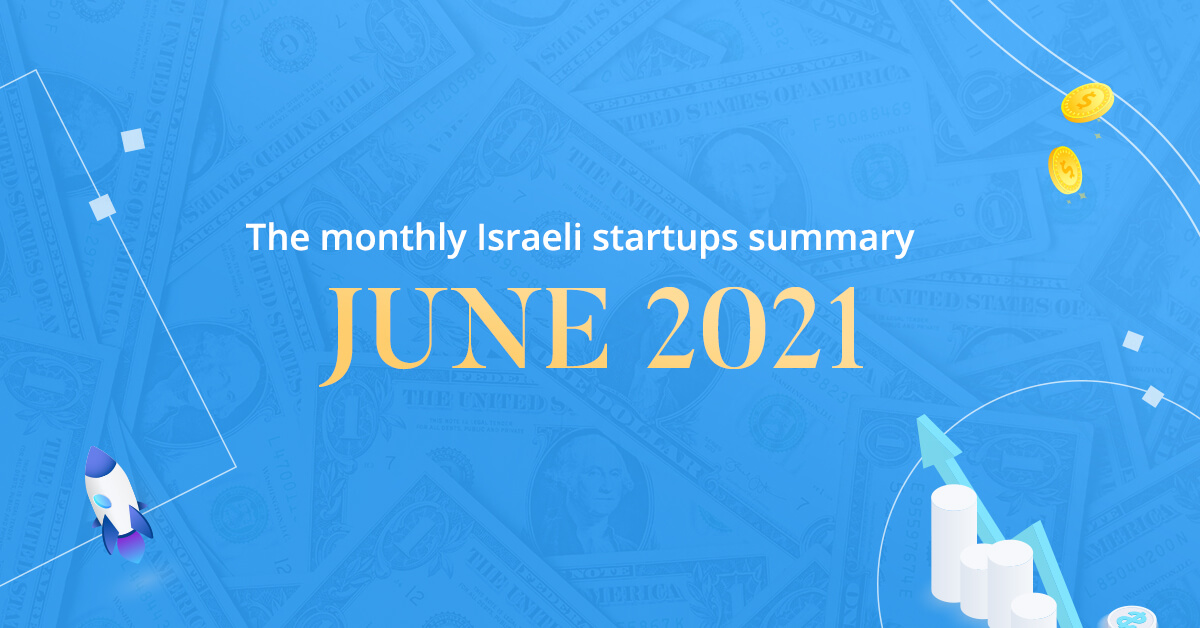 A super exciting month for the Israeli ecosystem: 46 Israeli startups raised over $2.34 billion, about 6 new Unicorns were born, new records for largest Series A and Seed rounds, and 8 Israeli companies went public (but that's for another article).

Israeli startups, we’re begging you: please stop. Stop getting these crazy investments every month, because we’re running out of superlatives and ways to describe our astonishment. We’re getting pretty tired of using adjectives like “record-breaking” and “incredible”, but you’re leaving us no choice.

Because this month, as well, 46 Israeli-founded startups (that we know of) raised more than $2.34 billion! Some of them broke a new record (we’re looking at you, Transmit Security) and new Unicorns were born. You could say it’s not so exciting anymore, but it’s actually even more exciting when it happens EVERY MONTH!

So, on the top of the list, way above the other companies, we have the cybersecurity startup Transmit Security with a jaw-dropping $543 million Series A round at a pre-money $2.2 billion valuation. That’s probably the largest Series A round for a cybersecurity startup, and one of the largest financing rounds in Israel. Transmit Security, founded in 2014, is aiming to eliminate passwords and develop new, safer methods for user authentication.

Another record was broken by Gong.io, which raised another $250 million in Series E that tripled the company’s valuation to $7.25 billion – the highest ever valuation for an Israeli startup.
Gong.io, in case you haven’t heard of the company, is used by more than 1,300 customers to automatically analyze sales calls and increase win rates.

Transcribing startup Verbit, a regular guest on our startup list, grabbed $157 million and turned into a lovely Unicorn with more than $1 billion valuation. The company employs 30K freelance transcribers all around the globe, serves more than 400 customers, and will use the new funds to conquer the $30 billion-worth transcribing industry.

Claroty, founded in 2014, is the leading industrial cybersecurity platform that enables its customers to identify, manage, and protect their OT (operational technology), IoT, and IIoT assets. Claroty is also a new member in the Unicorn club after securing a $140 million investment at over $1b valuation. Welcome!

Time to congratulate Firebolt and its fresh $127 million Series B financing. The startup, which has only recently emerged from stealth mode, is a Cloud Data Warehouse as a Service that enables users to analyze big data faster than any other platform.

Another regular guest on our list, Bringg, raised its highest round up to date – $100 million– and also joined the Unicorn club this month. Bringg, which saw a meteoric rise during COVID-19, is the #1 unified delivery & fulfillment cloud solution to making last-mile delivery seamless and quick.

Say hello to Hailo, the developers of breakthrough AI microprocessors for edge devices, and probably the next billion-worth acquisition you’ll hear about. Hailo began mass production of its Hailo-8 processor for autonomous cars, smart cities, smart retail, and more. The company has completed its $100 million C round and has reached a $1 billion valuation, which makes it a… Unicorn. What a surprise.

One of the most interesting companies in Israel is Venn, a new platform aiming to connect neighborhoods and turn them into thriving communities. Venn manages homes and shared spaces and connects everyone with an app: landlords with residents, residents with local businesses, and locals with other locals through real-life activities and events. The startup, which saw a 1200% growth during COVID-19, was connected to a $60 million investment this June.

What happens when you mix WordPress with Wix? You get the website building platform Duda. Duda is aimed at professionals who wish to make every website their own by combining no-code drag-n-drop with developing additional elements using JavaScript, CSS, HTML and APIs.
According to the company, every 17 seconds, a new website is created on Duda. Meaning, by the time you finish reading this paragraph, another two or three are created. No wonder the startup raised $50 million.

We’ve introduced you too many times to JoyTunes, the developer of educational apps for teaching children and adults how to play musical instruments, so we just want to congratulate the company for raising $50 million and becoming a Unicorn. It’s fun when companies like this do it!

From fun, to more fun – Comunix is the startup behind Pokerface, a popular online poker game with video and audio chat. It’s like a Zoom meeting, but without wasting your precious time. Their hit game has been downloaded by over eight million players, mostly thanks to the pandemic and quarantine, and made investors go all-in with a $30 million A round. A sure bet!

While we can’t tell you much about the MR (Mixed Reality) startup Mutilnarity, because it’s still in stealth mode, we can tell you that the company has raised $28 million – the biggest seed round in Israel. One of the founders worked in Magic Leap, but let’s hope that Multinarity will show better results.

Call 911! We have an emergency – an Israeli startup raised $20 million! Carbyne is a company with a mission to redefine emergency collaboration and act as a channel between emergency call centers and first responders to worried citizens or people who need critical assistance from the police, medical team, or fire departments. Carbyne’s platform also allows callers to transmit a live video to the corresponding teams, without needing to download any app.

Ready for the food of the future? Equinom is breeding seeds with AI, rather than genetic modification (GMO), to “turn regular food into super food”. The company is producing legumes, sesame, quinoa, and pea (coming soon) in crops of 100,000 acres in six continents. Equinom has raised $20 million C Round (sorry, seed round was a long time ago so that pun is gone). Bon appetit!

Shhh! Can you hear that? That’s the sound of Silentium adding another $20 million D Round to its total investments. Silentium, founded in 1998, has developed a patented Active Noise Control (ANC) technology that can reduce unwanted noise (like a car engine, industrial machines, etc.) by 90%.

Let’s wrap up this list with a startup fighting the worst and most dangerous insect on earth – the mosquito. Diseases like dengue, malaria, and zika- all spread by mosquitoes- are killing over 700,000 people every year. Diptera.ai raised $3 million to develop an affordable AI-based solution for sterile insect technique (SIT) and control mosquito populations. As VentureBeat accurately titled, “How AI and mosquito sex parties can save the world”.

Not mentioned in the infographic, but also worth bringing up are the Israeli-founded, US-based companies Exabeam, with a $200 million funding round, and car loan financier Lendbuzz, which raised $300 million in credit and $60 million in equity. In addition, Next Silicon, a 3-year-old semiconductor startup hoping to beat Intel one day, raised $120 million and became a Unicorn. The funding round took place in October 2020, but the company has only now been publicly revealed. 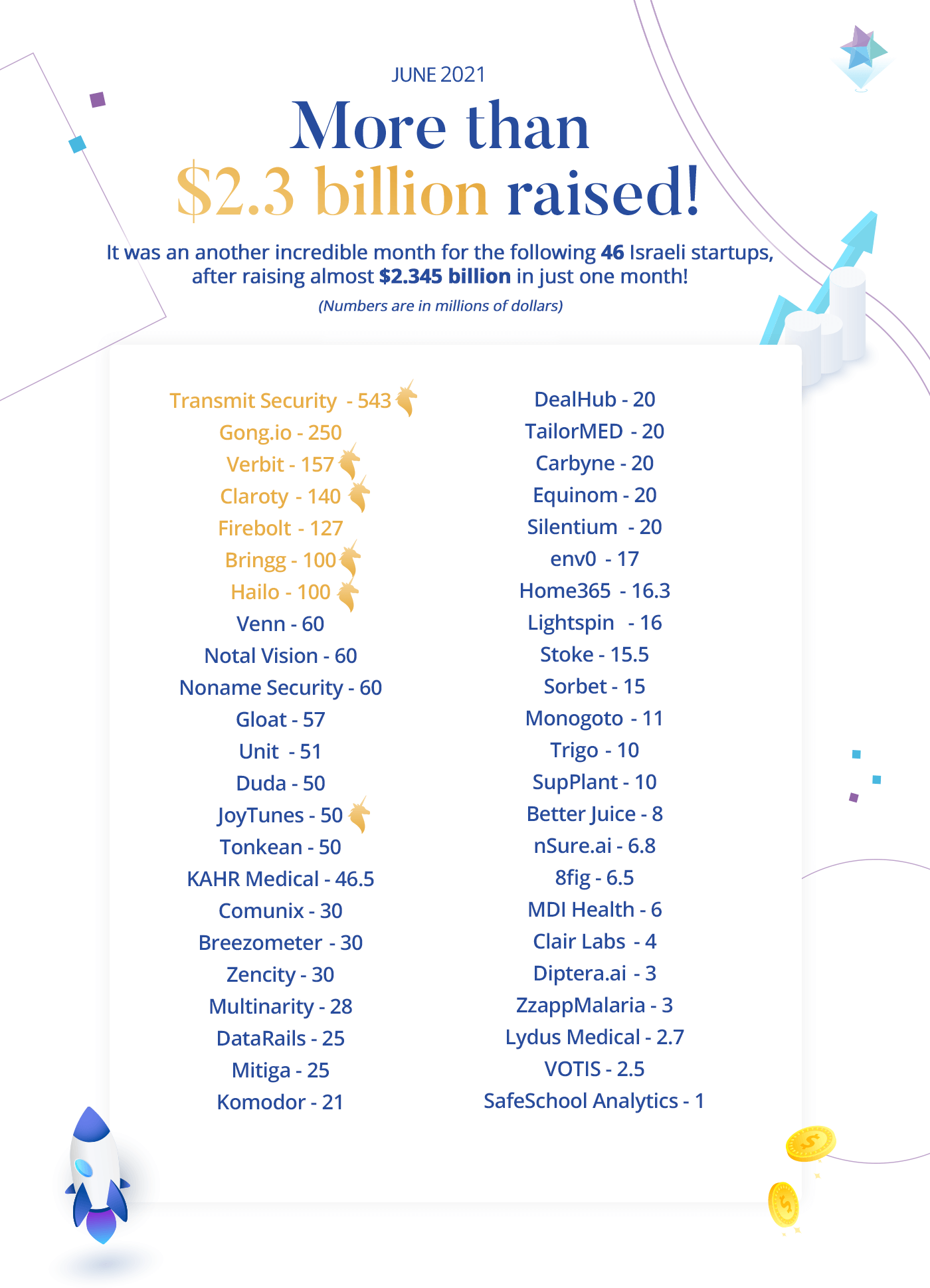 Well, what more can we add? Let’s hope that this “boom” of investments will continue, and we’ll see more tech employees in Israel laughing all the way to the bank. Nothing bad about innovation.