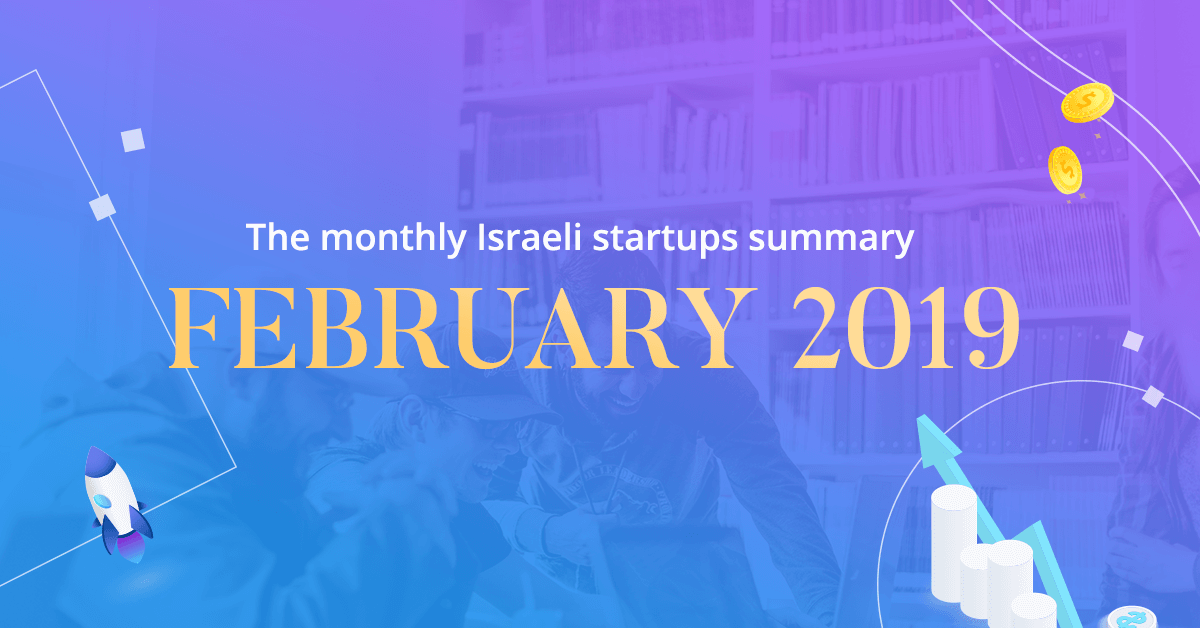 IN ONLY 28 DAYS, 34 ISRAELI STARTUPS RAISED A WHOPPING $570M, AND FEW OTHER COMPANIES WERE ACQUIRED. GREAT NUMBERS.

So, how’s 2019 been treating you so far? We know that it’s been going quite well for several Israeli companies, and more specifically these 34 startups on this month’s investments list, that raised a whopping total of $573.15 million. February 2019 also turned out to be the month of acquisitions.

Before we begin with the usual “Who Raised What”, we feel like sharing some exciting news about Israeli startups that got acquired this month:

Okay, let’s get back to business as usual with a few startups that caught our eye.

First in line, with an astonishing $110 million A round (!) investment is DriveNets. Their technology helps communications service providers handle growing demand for their service without forgoing profitability. DriveNets was founded in 2015 by Ido Susan, who already sold his previous startup Intucell to Cisco for $475 million.

Next on the list is Redis Labs, an open-source NoSQL Database provider, based in Mountain View California, with offices in Tel-Aviv as well. This month, the company grabbed a $60 million E round investment led by Francisco Partners. Since 2011, the company raised over $140m. Impressive!

We know you’re tired of hearing about cybersecurity startups, but you can’t live without them! This time we’re talking about PerimeterX that wants to protect your web applications and prevent automated bot attacks. The startup is now protected with an extra $43 million investment and a total of $80 million investments. Happy Protecting!

Hit the gong – Gong.io nabbed $40 million for its AI tool for sales teams. Gong uses voice recognition to record every word in the sales conversation, analyze it, and give valuable insights to score more sales. The company has more than 350 customers, but it also has an unfair advantage, their sales team uses Gong.io 🙂

Time to say “hi” to our neighbors – Cathworks. The medical imaging company that’s based a few floors below our offices raised $30 million in a series C funding. Maybe now they can afford a new office. Don’t forget to jump by for coffee before you go!

Is the future of blood tests here? That’s what Sight Diagnostics claims, and we pray that it’s true. The company built a device called OLO, that uses machine vision to test blood in seconds, without waiting for lab results. And the results? Sight Diagnostics was tested positive for a $27.8 million investment. You better Go C a doctor, it looks SERIES.

From blood to pee – Healthy.io wants to bring urine tests to your homes (well, not literally, that would be awkward). Healthy.io lets you test for infections, kidney disease, or pregnancy-related complications at your home using nothing but a dipstick, a urine sample and a smartphone app with machine vision as accurate as doctors. The product was already approved for sales in the US and Europe. The company raised $18 million this month, and a total of $30.5m since 2013.

Serial entrepreneur Iris Shoor is the woman behind Oribi, a startup that already has hundreds of paying customers without a sales team! Oribi helps businesses easily understand website results and provide them with the actionable info they need. The company raised a $7 million B round this month, and we expect great things ahead.

Many of you have asked us (OK, no one did) where all the fashion-tech startups are. Well, here’s Donde Search, that started as an eCommerce website with unique search-by-style technology, and then decided to pivot and sell this amazing visual search technology to others. Basically, they use Machine Learning and NLP to know exactly which clothing shoppers are looking for. And what was Donde looking for? An investment. They got one – $6.5 million in A round. Chic!

No Israeli startups list is complete without cryptocurrency. This one’s Beam, that develops cryptocurrencies to protect user’s privacy. Beam is unique in how they raised the money: Instead of the regular ICO (Initial Coin Offering), they got a $5 million investment using a framework called SAFT (Simple Agreement for Future Tokens), that grants the investors Beam coins on a monthly basis for five years.

What about some maritime innovation? Orca AI, “The Mobileye of the Ships”, raised $2.6 million to prevent boat collisions. The technology is based on thermal cameras, low-light cameras, and other sensors that alert the ship operators of upcoming danger. The round was led by MizMaa Ventures with participation from Ray Carriers and The Dock Innovation Hub.

We’re always hungry for new ideas that make us mumble words like “brilliant”, “wow”, or “wish I had thought of that”, and these are exactly the reactions we had when we heard about Tastewise. The Israeli Foodtech startup, that raised $1.5 million this month, analyzes billions of menus, customer reviews, online recipes and Instagram photos to provide restaurants with the latest food trends and insights in real time. Tasty!

After Bird, Wind and Lime, another e-scooter company is trying to make it in Tel-Aviv, but this time – It’s made in Israel. The startup is called LEO, and its operated by the people behind the scooter marketers Inokim. The company’s main investor is former soccer star Eyal Berkovic, who put NIS 2 Million (About $0.55 million) into LEO. 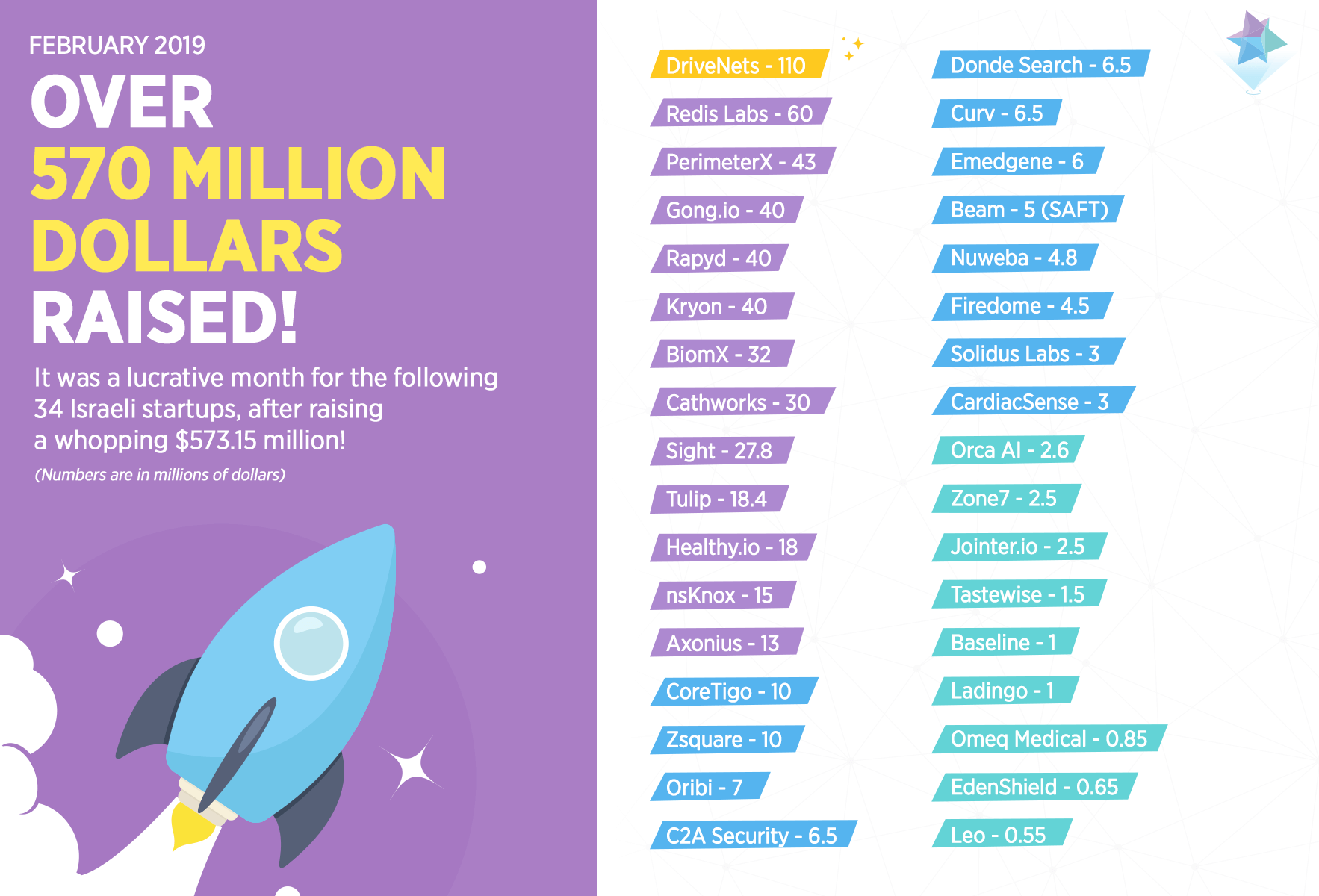